Ottawa's troubled Capital Pride festival has delayed bankruptcy proceedings for 45 days and appointed a temporary board to look over its finances.

New, temporary board established to see if there are other financial options 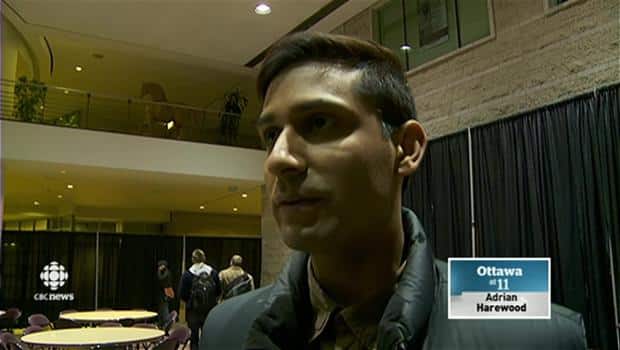 6 years ago
2:05
A new Capital Pride board has until late December to look at other financial options for the festival. 2:05

Ottawa's troubled Capital Pride festival has delayed bankruptcy proceedings for 45 days and appointed a temporary board to look over its finances.

Capital Pride held its public annual general meeting on Wednesday evening in Jean Pigott Place at Ottawa City Hall, where two separate groups, vying to breathe new life into the festival, were to present their proposals before bankruptcy was officially filed Thursday morning.

Those two groups didn't end up getting to present. Instead, a vote passed to appoint a temporary board to look over its finances and see if bankruptcy could be avoided.

"The only thing we can say at this point is that we're feeling really optimistic," said Jeremy Dias, a member of the interim board.

"We're excited that the community is so engaged in the Pride movement and we're hoping to use that momentum to move forward.​"

Capital Pride will hold another meeting in early December. The 45-day time frame means the festival would then make its bankruptcy decision by the week before Christmas.

The board's appointment came after a testy, emotional meeting of around 200 people that was open to the public, but closed to cameras.

Festival board chairwoman Jodie McNamara was in tears at some points, saying organizers are deeply sorry and made mistakes.

Some in the crowd grew upset when the festival's current board deferred direct questions about bankruptcy to lawyers, and wouldn't answer others because of what McNamara said was a fear of libel.

"It felt like being on a ship that was sinking and there's nothing you can do to stop it," McNamara said outside Wednesday's meeting.

A former chair of Capital Pride said he left hoping for more answers.

"The members were upset because they didn't get any answers they wanted. They should have come more prepared with better answers saying this what happened," said Michael Lafontaine, who led the festival last year.

"Because when we look at these statements, the answers should be right there for us to take away. And they weren't."

Groups hoping to take festival over will wait

This past summer's festivities drew more people than ever before, but some vendors who provided infrastructure and other services remain unpaid.

At the meeting it was revealed the festival is facing a deficit of $86,000, including a $25,000 shortfall in revenues, meaning it doesn't qualify for city funding,

Christopher Doyle, who was part of one group hoping to take over Capital Pride, has McNamara's backing.

That's caused some concern in the community, since she led the board that ran Capital Pride into financial trouble.

In an interview on CBC Radio's All in a Day earlier Wednesday, an hour before the AGM, Doyle said the outgoing board did ask members of the LGBT community who they thought should be running the pride festival, and that he was on a list of about six people the community supported.

"The existing pride board, around about the time bankruptcy became inevitable, started looking through who was in a position to make decision to give the new whatever the Pride will become some credibility, some authority," he said.

"So they reached out to about 20 different people in town that run other events, charities and the community organizations, and asked the question, who do you respect and what should they be doing?"

Another group, led by Gatineau Pride co-president François Zarraga, wants the new pride festival to be more inclusive. His group, while smaller, isn't associated with the board members who led Capital Pride into bankruptcy.

"It should be different because the community is changing with time, and I feel that the Capital Pride as it is now doesn't offer what we need," Zarraga said on All in a Day.

He's hoping pride events will be held on both sides of the river, catering to ethnic and Francophone communities as well.

Capital Pride had announced in September it was investigating "accounting irregularities" in a post-festival review of finances, after several suppliers went public to say they hadn't been paid.

Then in October, the organization announced it was declaring bankruptcy after 29 years of operations.

Ottawa police fraud unit investigators have opened a file into the financial issues at Capital Pride, according to police sources.