An Ottawa man whose speeding car jumped a curb and killed a couple waiting at a bus stop in 2010 has been sentenced to 18 months in jail. 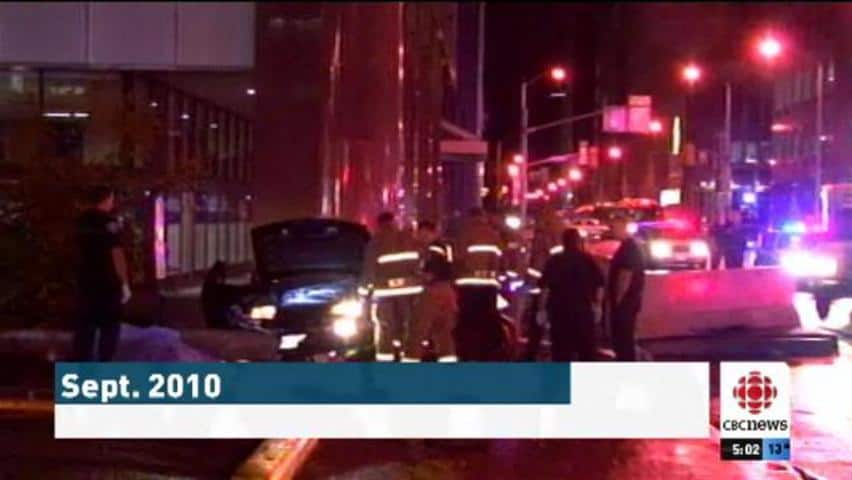 8 years agoVideo
2:39
Young man who lost control of his car while speeding and killed a couple waiting at a bus stop was sentenced to 18 months in jail 2:39

An Ottawa man whose speeding car jumped a curb and killed a couple waiting at a bus stop in 2010 has been sentenced to 18 months in jail.

Simon Banke pleaded guilty in early May to two counts of dangerous operation of a motor vehicle causing death in the deaths of Leo Paul Regnier, 36, and his wife Sherrianne, 35.

The Regniers were returning from an evening out on Sept. 16, 2010 and were waiting at a temporary bus stop on Albert Street west of Bank Street when witnesses said a sports car turned from Bank onto Albert, jumped the curb and struck the couple.

Paul Regnier was pronounced dead at the scene, while his wife died in hospital in the days following. Their three daughters are now in the care of one of Paul Regnier's sisters.

Banke will only serve a maximum of 13 months in jail after Justice Lynn Ratushny gave him credit for time served.

Ratushny said to Banke "you treated your car as a toy and driving home as a sport", but she also said he was remorseful, had an excellent education and employment record and had excellent prospects for rehabilitation.

Relatives of the Regniers said they had hoped for a much longer sentence.

"Those little girls don't have a mommy and daddy anymore," said Suzanne Baker. "Now come on! Just because he's a good kid does that mean he doesn't get punished?"

"I feel that the boy is going to go to jail and do his time and hopefully he learns his lesson from it," said Sherrianne's brother Ron Lacelle. "I don't think it's long enough — but time in jail — he'll learn."

Banke will have to serve at least a third of his remaining sentence — about 4 months — before being eligible for day parole.

He must also perform 200 hours of community service, speaking to young people about the dangers of driving recklessly.