An autistic designer has developed custom tools made of cardboard, paint and glue for children with special needs. 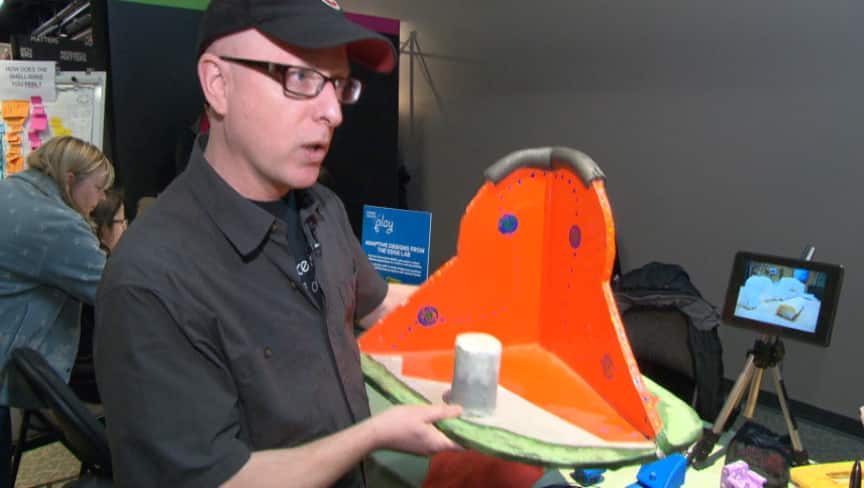 7 years agoVideo
2:17
An autistic designer has developed custom tools made of cardboard, paint and glue. 2:17

An autistic designer has developed custom tools made of cardboard, paint and glue for children with special needs.

Jason Nolan said his cardboard creations are an affordable alternative for parents who would otherwise spend thousands of dollars. He can build a corner chair — made to help a child who's normally in wheelchair sit up in a sandbox — for just $7.

"Cardboard is the most amazing tool to work with. It's readily available, it's very cheap to use and anyone can work cardboard — it doesn't require any special tools," he said. "And when you're done with it, you can recycle it. If you need to fix it, it's just cardboard."

Nolan, a professor of early childhood studies at Ryerson University, was at the Science and Technology Museum in Ottawa on Saturday to show off his creations.

Terry Newton said he is now considering one of Nolan's designs for his nine-year-old son Henry, who quickly grew out of his custom corner seat.

"The cardboard design is, I think better, because it's cheaper. It's easy to customize. You can change things afterwards rather than getting a brand new chair or a brand new standard," Newton said.

"Childcare centres are pretty strapped for cash strapped at the moment. So things like this that we could learn to make ourselves would be very good," she said.

For now, parents can get Nolan's creations for free thanks to research funding but Nolan hopes to commercialize the designs so that more people can have access to them.

Nolan plans to create a social networking site where people can share ideas and connect with designers.