Love songs, art and edgy theatre to fill your weekend

Love songs, innovative theatre and new paintings at Cube Gallery are among the top artsy ways to spend this midwinter weekend in the capital.

A list of artsy things to do in the nation's capital Feb. 9-11

Love songs, innovative theatre and new paintings at Cube Gallery are among the top artsy ways to spend this midwinter weekend in the capital.

"I have always been aware of being different," said Takeuchi. " My paintings deal with this and try to come to terms with how I fit in and become part of my surroundings."

Takeuchi was born in Vancouver, his mother was Canadian and his father was originally from Japan.

His family was among the 20,000 Japanese-Canadian families who were stripped of their rights and property, displaced and declared enemy aliens during the Second World War.

The scars from that time have lingered, but they've led Takeuchi on an artistic journey of self discovery.

"For a long time I rejected my Japanese heritage," said Takeuchi, "but then I reached the point where I wanted to start dealing with my heritage.

"And I started very slowly incorporating Japanese images into my paintings, but hanging on to my abstract shapes because that is the Canadian part of me." 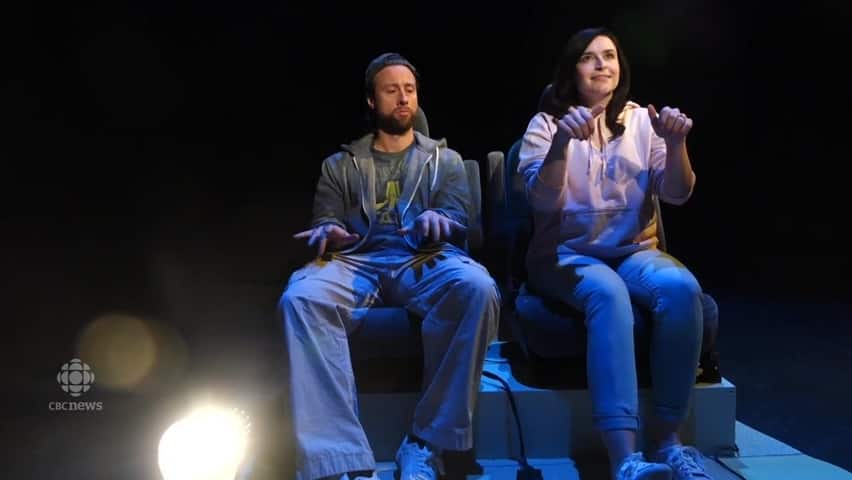 3 years agoVideo
0:39
Actors Carter Hayden and Gabrielle Lazarovitz are on a fateful drive in 'Little Boxes' at Arts Court. 0:39

If you're looking for fresh, innovative theatre works, as well as readings and workshops, then the 10-day undercurrents festival is the place to be.

Every year, undercurrents brings some of the best shows from the Canadian theatre circuit to the stages of Ottawa. New works, from political satire to personally charged stories, to puppet theatre, are part of this year's festival, most of which is happening at Arts Court.

Daughter, the recent hit from Toronto's Adam Lazarus, will have its Ottawa premiere at the NAC's Fourth Stage on Saturday.

COST: Tickets range from $15 for matinee performances to $25 for some evening shows. Festival passes are also available.

Schedule and tickets are available here.

For years, Cardiff has been asking audience members to write down their true thoughts and experiences in books he circulates during his concerts, with the result that some of those true stories have found their way into his songs.

"They've got these amazing stories and amazing things to share, " said Cardiff. "Lately in the books I've been passing around at shows, I've been collecting a lot of stories about love."

He promises to avoid sickly sweet love ballads when he performs two Valentine-themed concerts this weekend. The Arnprior singer-songwriter says his music is rooted in reality, exposing the messiness and awkwardness of relationships as well as the tender moments.

Cost: Tickets are $20 and can be purchased here. As of Friday afternoon, the Saturday show was sold out.

The Canadian Showtime Chorus is made up of 85 female voices who deliver four-part harmonies and a cappella performances in the jaunty style of an old-fashioned barbershop quartet.

The singers meet to rehearse every Tuesday night in Bells Corners, and it's a labour of love that's led to success at international chorus competitions. On Saturday night, they'll be singing their hearts out in aid of the Canadian Women's Heart Health Centre with a performance called For Sentimental Reasons.