Ringing in 2969 with Ottawa's Amazigh

It will soon be 2969 for those in Ottawa's growing Berber, or Amazigh, community. This Saturday they'll celebrate the new year with music and traditional food.

Inside a small community centre in Gatineau, women clad in brightly embroidered dresses sing songs of the Amazigh — the Indigenous people of North Africa.

The women are preparing for a performance this Saturday to celebrate Yennayer, New Year's Day for the Amazigh, also known as Berbers.

Jan. 12 marks the start of 2969 for the ancient community, which observes a traditional agricultural calendar.

"We want to showcase our culture, our language, our apparel, our food," said Saliha Sennad, who leads the Tilelli Choir, which began two years ago.

"We try to get Canadians and other cultures to come to the event and know us."

The Amazigh community in Ottawa-Gatineau is growing, from about 10 families two decades ago to between 300 and 400 members today.

They prefer to be called Amazigh "because Berber has a negative connotation," explained choir member Oumhani Belhout. "It was a name given to us by the Romans, and it [meant] the people who were different than them."

On occasions such as this choir practice, community members pause from their busy lives to come together and reconnect with their traditions.

Their stories and history are kept alive through song and poetry, Sennad said.

The music often tells stories of love, immigration and a passion for freedom, Sennad said, adding that it's only in the last few decades that the Amazigh people started writing down their own history.

"In the old days, people [kept] poems and everything in their heads. They [didn't] write them."

Belhout added that music is a tool that her community uses to teach the younger generations how to speak their language.

"We are very attached to our language and we want our children to speak it," she said. "A language not spoken is a language that will die, and we don't want that." 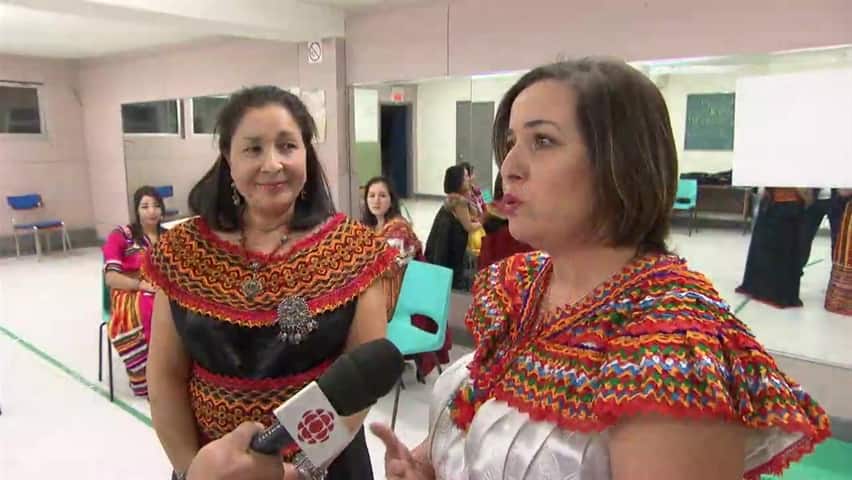 More than 300 people are expected to attend the event this weekend, which will feature a traditional couscous dinner and performances by musicians and other community members.

The New Year's concert will take place at the Glebe Community Centre at 7 p.m. on Saturday. Tickets can be bought here.

If you go, be sure to say Aseggas Ameggaz​ — Happy New Year in Tamazight.