A young Ottawa man plans to file a complaint with Algonquin College and wants Ottawa police to investigate after he was injured during an arrest by college security guards while he was walking home from a grocery store in the dark.

A young Ottawa man plans to file a complaint with Algonquin College and wants Ottawa police to investigate after he was injured during an arrest by college security guards while he was walking home from a grocery store in the dark.

Noah Coker, 21, said he was cutting across campus to get to his home on Tower Road after shopping at a nearby 24-hour Loblaws store at College Square. He was carrying a plastic bag with bread and milk inside.

As he walked past student residences and a soccer field, he said he was approached by a security guard who warned him about trespassing.

"I guess because I was stumbling or something, I was approached by a security guard at Algonquin who reminded me that Algonquin was private property and that I should probably be on my way," said Coker, who is half black, in an interview Friday.

He said he didn't think he was stumbling, and that he was perplexed at being singled out. He was walking alone, but there were other people nearby, skateboarding and hanging out on campus.

To protect himself, Coker said, he took out his smartphone. 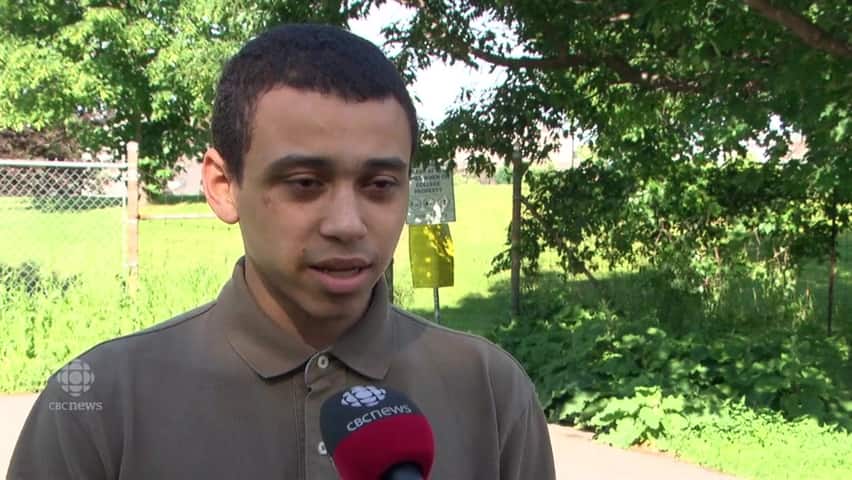 'It really just perplexed me'

1 year ago
0:48
Noah Coker, 21, says he was walking home from buying groceries on Wednesday night when he was tackled and handcuffed by Algonquin College security guards. 0:48

"I took out my phone to try to record him, because I was scared and you know how these situations usually play out," he said.

The phone's battery was dead. At that point the first security guard called for backup, and two more guards showed up to escort Coker off the property, he said.

As they reached the parking lot of the veterinary science building, which is a short walk from his home, Coker, who didn't want the guards to see where he lived, said he turned around and asked the guards to stop following him.

That's when the situation escalated.

"[The guards] took me down and I guess tackled me. I hit my head on the concrete and just crushed my groceries, and they arrested me and put me in cuffs and brought me to the security building," he said.

Asked if he felt race played a role in the arrest, Coker said it didn't feel that way at first.

"I didn't feel that way until ... one of the security guards came over and, as I was being taken down and arrested, he handcuffed me and said, 'Oh, don't worry, you look fine, you look like you've been arrested before,'" Coker said.

Coker's girlfriend, Cassandra Gendron, heard screaming from the front porch of their home on Tower Road, less than 500 metres away. Gendron was with her sister, waiting for Coker to come home with the groceries.

"I just heard a bunch of screaming and yelling," she said. Gendron then asked her sister to come with her to see what was going on.

"We started booking it to the situation because ... it looked like he was getting mugged. His bag was ripped, his food was everywhere," she said.

She was shocked to see security guards on top of her boyfriend, and said they should be fired.

"There's kids and there's dorms here where kids are trying to walk home or they're going to go get food, and people are just going to get attacked? ... That's insane. They shouldn't be working there, they should get new security," Gendron said.

In an emailed statement to CBC News on Friday, Algonquin College said security staff "became aware of a man causing a disturbance on college property" Wednesday, and that he was "noticeably intoxicated and hostile when approached."

The college said Coker, who is not a student, was asked repeatedly to leave and was warned he would be arrested if he didn't comply.

"When he failed to leave he was arrested, at which point he became violent with security and a scuffle occurred," the college's statement reads.

Coker said he did have four small (236 mL) cans of beer over five hours, and insisted he wasn't being belligerent and wasn't drunk.

"You look at me, I'm a tiny guy. There's no need for three security guards to come up to me and bully me out of the Algonquin parking lot," he said.

"I just felt like I was tired. I was trying to get home with my groceries and make my food and go to bed. I was more tired than anything."

After arresting Coker, the college said the matter was turned over to Ottawa police.

Coker recalled that Ottawa police officers removed his handcuffs, watched security footage of the incident, and released him without charge.

Police confirmed Friday that no charges were laid, but that a trespassing ticket was issued by campus security.

On Thursday, Coker spent several hours at the Ottawa Hospital to be treated for a mild concussion. His face and shoulders are bruised and scraped. He's experiencing painful headaches, he said, and bright lights hurt his eyes. An ER doctor's note recommended a couple days off work.

Until the no trespassing order is lifted, Coker is banned from campus, doubling the length of time it will take him to walk to and from the grocery store.

Meanwhile, Coker has scheduled a meeting with Algonquin College next week to file a complaint. He said he also wants Ottawa police to investigate the arrest as an assault.