A child who had escaped a fire that killed his mother and two siblings in the eastern Ontario community of Alexandria has died as a result of his injuries, according to hospital officials. 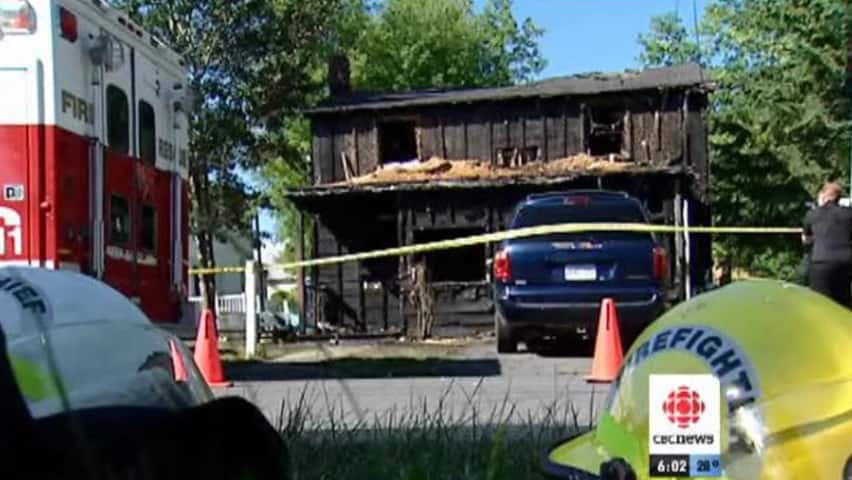 9 years ago
3:09
A mother and her two children are dead after a fatal fire in Alexandria. 3:09

A child who had escaped a fire that killed his mother and two siblings in the eastern Ontario community of Alexandria has died as a result of his injuries, according to hospital officials.

Friday's early morning fire had already claimed the lives of the child's mother, Sarah Cholette, and the two other children, three-year-old Chloe and eight-month-old Jacob.

Cholette's partner, Martin Desjardins, and their 22-month-old son Maxime survived after Desjardins jumped out of a window with his son in his arms as the fire spread.

Desjardins was transported to Toronto's Sunnybrook Hospital, while Maxime was sent to the Children's Hospital of Eastern Ontario in Ottawa.

CHEO officials and the boy's grandfather confirmed Maxime died at 10:07 a.m. Monday. Desjardins remains in a coma and is listed in critical condition.

Prayer services were held Saturday and Sunday at the Sacré Coeur Church in Alexandria, a town of 3,000 about 100 kilometres east of Ottawa.

Rev. Denis Vaillancourt said the fire has been difficult for people to come to terms with.

"The community is saddened by such a tragedy and questioning how such a thing could have happened," Vaillancourt said.

Home had only one exit

Many parishioners that CBC News spoke with noted the house had no back door that the family could use when flames blocked the front entrance. Ontario Provincial Police confirmed the home had only one exit.

Family members said Desjardins purchased smoke detectors a year ago because he was concerned about a house fire. It hasn't been confirmed if they were working.

Fire crews were called to the home at 2:30 a.m. Friday. Neighbours said they awoke to screaming and saw the father jump out a window with one of the children as flames could be seen inside.

Firefighters and emergency crews arrived at the scene and brought the remaining family members from the house and tried to resuscitate them but were unsuccessful.

Police said the fire marshal has finished the on-site investigation, but the cause is still unknown.

Across the street from the blackened facade of the family's home, neighbours Michel Bellefeuille and Julian Chartrand on Sunday said they were still in shock over the incident.

It has broken the heart of the community, Bellefeuille said.

Friend Tina Paquette also wants the community to do what they can for the family. About $2,000 has been raised by local merchants and Giant Tiger in Alexandria is accepting donations.

"As a neighbour, as a friend, as someone who has known these children, who has known Sarah, known Martin, we're coping. It's tragic," said Paquette.

"We're sad and we're in disbelief."

Family members said visitations are planned for Thursday from 2-4 p.m. and 7-9 p.m. and the funeral is set for Friday at 11 a.m. CBC News was told an organization has come forward to pay for the service.