A videotaped police interview of a former Mountie accused of killing Ottawa police officer Eric Czapnik shows him expressing condolences to the officer's children, but not making a confession as the Crown alleged. 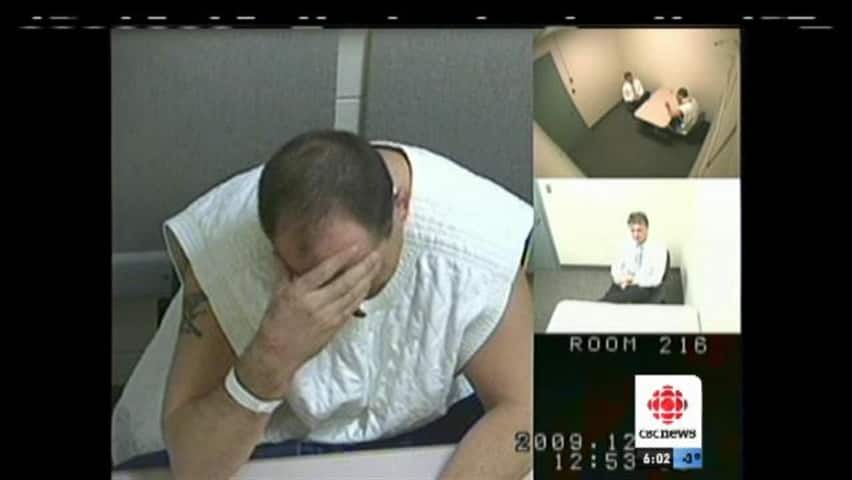 9 years ago
2:53
CBC's Steve Fischer discusses what was shown in court Tuesday. 2:53

A videotaped police interview of a former Mountie accused of killing Ottawa police officer Eric Czapnik shows him expressing condolences to the officer's children, but not making a confession as the Crown had alleged.

Kevin Gregson, 45, is charged with first-degree murder in the death of Const. Eric Czapnik, 51, who was stabbed outside the Civic Campus of the Ottawa Hospital in the early morning of Dec. 29, 2009.

Gregson is also charged with robbery in relation to a carjacking the night before the stabbing. He has pleaded not guilty to both charges.

The Crown said in court last week Gregson had confessed on videotape recorded in December 2009, but there was no clear admission of stabbing and killing Czapnik in the video shown in court Tuesday.

Gregson did say right into the camera in the 2009 video, "I'm really sorry about your dad," speaking to the officer's three children.

In the videotaped interview, Gregson hesitates and says speaking would go against legal counsel. He also discussed failed suicide attempts.

Gregson is shown speaking to Sgt. Tim Hodgins of Ottawa police, who interrogated the former Mountie for more than three hours.

He described the altercation with Czapnik and the effort to obtain his gun. He blames the officer's holster for making it difficult to steal the weapon.

Last week, the court was told of the tape, but it was not officially brought to the court's attention until Tuesday.

The court also heard Monday from one of Gregson's ex-wives, whose identity cannot be revealed because of a publication ban.

The woman said she and the former Mountie had an emotional confrontation over an alleged sexual assault of a 10-year-old girl just a day before Czapnik's death.

Gregson had denied the allegation, she told the court, and said, "I'm done. The RCMP will jump on this. I'm finished." Gregson was ordered to resign or be dismissed from the force in 2008 after a series of disciplinary incidents.

The sexual assault allegation will be heard in a separate and unrelated trial in September. Justice Douglas Rutherford also told the jury the allegation is unproven and should not colour their judgment, and said it should be considered only as it relates to Gregson's state of mind.

The court also heard Monday about the alleged carjacking that took place before the killing of the police officer. Two witnesses said a man approached them around 9 p.m. on Dec. 28 and told them at gunpoint he was stealing their car.

The man said they called police after stepping out of the vehicle, which was later identified at the hospital where Czapnik was killed.

The court also heard Monday Gregson was seeking overseas work in 2009, and wanted a position where he could use firearms.

The defence is expected to lay out its case after the Crown has presented its evidence.