A group of aboriginal artists in Ottawa wants to rename the controversial statue of a First Nations scout tucked away in a corner of Major's Hill Park. 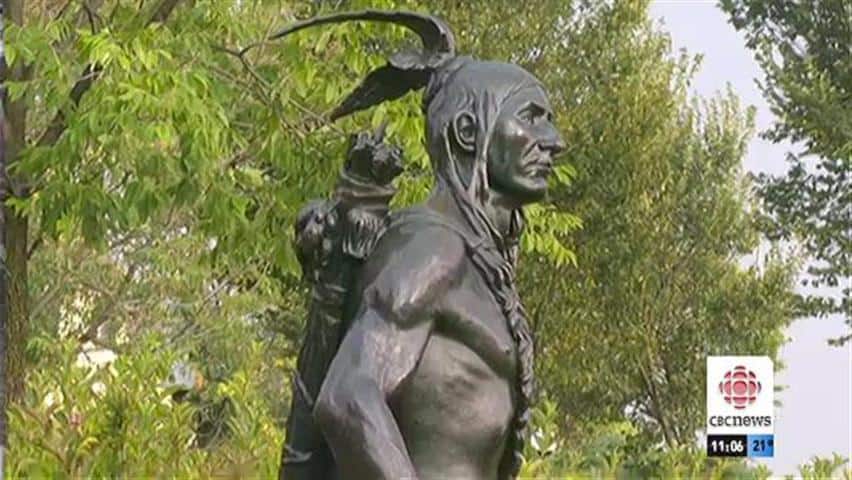 A new name for statue?

A group of aboriginal artists in Ottawa wants to rename the controversial statue of a First Nations scout that sits tucked away in a corner of Major's Hill Park.

The bronze sculpture, known as Anishinabe scout, was created in 1918 by Hamilton MacCarthy, to go next to the statue of Samuel de Champlain at Nepean Point.

The statue was intended to show how aboriginal peoples helped the explorer navigate the Ottawa River. The figure was originally supposed to be kneeling in a canoe, but the citizen's group who commissioned the statue lacked the funds for the canoe, so it was placed kneeling beside the Champlain statue in 1924.

In the 1990s, the Assembly of First Nations took issue with its stereotypical image and what looked like a subservient position to Champlain, so the National Capital Commission responded by moving it to Major's Hill Park.

Now some members the aboriginal community in Ottawa want to reclaim the statue.

Artist and Filmmaker Howard Adler is part of a group spearheading efforts to rename it.

"It hasn't had a name for 100 years, other than unknown Indian, or Indian scout, or Anishinabe scout," said Adler. "So I think it's important to give this statue a name, and to say Indigenous have names, and we're people too. We're not just stereotypes." Adler's group asked Algonquin elder Annie Smith St. Georges to give him a new name in a ceremony.

She decided on "Gichi Zibi Omaami Winini Anishinaabe" — a traditional name for the Algonquin people.

"That is the most appropriate name that I would have been able to give him — is to bring back our culture, our nation," said Smith St. Georges.

The group is in talks with the NCC to have the statue formally renamed with a new plaque, one they hope will give it new prominence.

"I think that he was a lonely soul down here," said Smith St. Georges.