Ontario's police watchdog has charged an Ottawa police constable with manslaughter, aggravated assault and assault with a weapon in the July 2016 death of Abdirahman Abdi.

Ontario's police watchdog has charged an Ottawa police constable with manslaughter, aggravated assault and assault with a weapon in the July 2016 death of Abdirahman Abdi.

Abdi, a 37-year-old Somali-Canadian man with as yet unspecified mental health issues, lost vital signs during a confrontation with Ottawa police constables Daniel Montsion and Dave Weir on Sunday, July 24, 2016.

He was pronounced dead in hospital the following afternoon.

Montsion — who usually apprehends gang members as a member of the Ottawa police direct action response team (DART) but was assisting on patrol that day in July — was charged Monday afternoon by the province's Special Investigations Unit (SIU).

He is scheduled to appear in the Ontario court of justice in Ottawa on March 29, the SIU said. The 36-year-old had been on desk duty throughout the investigation and is now suspended with pay.

Weir was also being investigated by the SIU initially, but was later deemed to have been a witness officer only.

The SIU investigates cases of death, serious injury or sexual assault involving police in the province.

About 9:30 a.m. on July 24, police were called to the Bridgehead coffee shop at the corner of Wellington Street West and Fairmont Avenue "for reports of a man causing a disturbance," the SIU said in a news release issued later that day, after it had taken charge of the investigation.

Exactly what happened in the coffee shop remains unclear, but has been described as groping. Owner Tracey Clark — who said she didn't witness it herself but spoke to staff who did — described Abdi's actions as an "assault" and "harassment" of more than one person inside.

"It was a rapidly escalating situation where Mr. Abdi did harass a customer, and more than one, and several customers [sought] to move him out of the store to restrain him until police could arrive," Clark told CBC News at the time.

She added that Abdi had visited the store on previous occasions.

"He would stand and stare at customers, or get a little bit too close, and we were beginning to hear from customers that it was making them feel uncomfortable. And so we had started to have those conversations where, 'Are you aware of this behaviour, could we ask you not to do that?' So there were some interventions like that that had taken place," Clark said.

Once outside the coffee shop, it appears Abdi headed northeast on Wellington Street West in the direction of his home in an apartment building on Hilda Street, about three blocks away.

Abdi and an Ottawa police officer who had responded to 911 calls from the coffee shop were spotted at the intersection of Wellington and Garland streets, one block south of Hilda, by resident Ross McGhie and his partner.

By that time, Abdi was holding a piece of foam construction equipment and was interacting with the officer.

"It was one of the foam panels that's used to support a temporary traffic sign. He was using it apparently to ward off what he thought would be blows. He had it over his head and he was using it to deflect advances from the officer. The officer was following with his baton," McGhie told CBC News at the time.

Then, at the corner of Wellington and Hilda streets, the officer tried to grab Abdi, who dropped the foam panel and ran to the door of his apartment building at 55 Hilda St. The officer arrived first and prevented Abdi from going inside, McGhie said, by using a baton "a few times" on Abdi's legs, arms and upper body while shouting at Abdi to comply. 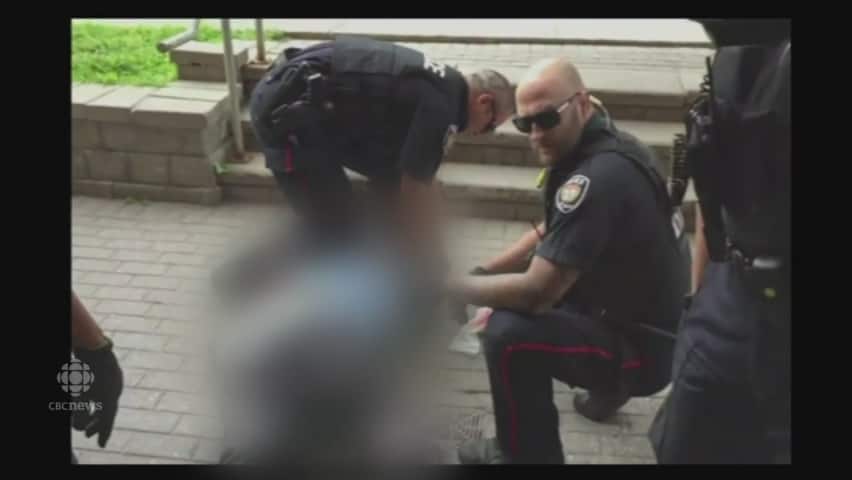 4 years ago
1:51
Police kneel and stand by the bloodied and handcuffed Abdirahman Abdi as people inside an apartment building cry out. Warning, some people may find this video disturbing. 1:51

At that time, another police officer arrived at the scene in a cruiser.

"The officer emerged from that car very rapidly ... pulled up right in front of the building ... immediately jumped into the altercation and administered a number of very heavy blows to the head and face and neck of Mr. Abdi," McGhie said.

McGhie and his partner did not see how Abdi was subdued and handcuffed. Cellphone videos shot from inside Abdi's apartment building show Abdi lying on his stomach, handcuffed, while constables Montsion and Weir guard him. Paramedics later arrived and began chest compressions with the help of police.

There has been no official word on how long the response took, but witnesses said it took about 15 minutes for paramedics to arrive and for CPR to begin.

A spokesperson for the family later said doctors told them Abdi had been dead 45 minutes before he arrived at hospital.

Abdi's death sparked multiple protests in Ottawa, as well as in Toronto and Montreal.

Abdi's relatives faced a "long and difficult wait" during the lengthy SIU investigation and are happy it resulted in charges, said Lawrence Greenspon, a lawyer hired by the family.

"It's been extremely difficult. You not only have the incredible grief that we really can't understand unless we go through it ourselves, and I don't wish that on anybody," Greenspon told reporters Monday afternoon.

"You have this grief of losing a son, brother, and it's magnified … the public light has been shining on this death, this tragedy, for eight months now."

Greenspon said it was his understanding that Montsion would be turning himself in Monday afternoon and then released on conditions.

He said the family would likely be launching a civil lawsuit as well.

The officer involved, like any member of the community going through a similar process, deserves to be treated fairly.- Ottawa Police Service Chief Charles Bordeleau

In a statement posted to the Ottawa Police Service's website, Chief Charles Bordeleau wrote that the circumstances surrounding Abdi's death have been "difficult" for his family and the community — along with the city's police force.

"The officer involved, like any member of the community going through a similar process, deserves to be treated fairly," Bordeleau's statement said.

"Our members are professional and they care about this community. They respond to calls for service from the community with the goal of helping those involved. It is a difficult job and they have my support and the support of the executive command and all senior officers. "

Bordeleau said he could not comment on the SIU investigation.

Matt Skof, president of the Ottawa Police Association, told CBC News the city's police officers will "continue to be professional" as the criminal case against Montsion makes its way through the courts.

"In my 10 years as president, we've had nine officers already go through the criminal process," Skof said.

"So the members are unfortunately used to having to deal with this type of scrutiny, with this public exposure."

None of those nine officers was convicted of criminal charges, Skof added.

​Eli El-Chantiry, chair of the Ottawa Police Services Board, wrote in a statement that police continue to work to rebuild trust with the city's Somali-Canadian community in the months since Abdi's death.

One month after the fatal confrontation, the force launched an outreach group in an attempt to repair that fractured relationship.

The board sympathizes with Abdi's family and friends, El-Chantiry wrote, adding that Abdi's death has been "very difficult" on both the community and the police service.

"Regardless of the SIU's investigation, there is no good outcome," El-Chantiry wrote. "At the end of the day, a man lost his life."