A video taken in 2011 during a routine inspection of the east-end storm sewer that collapsed and caused a large sinkhole in September showed the steel pipe was severely corroded, CBC News has learned. 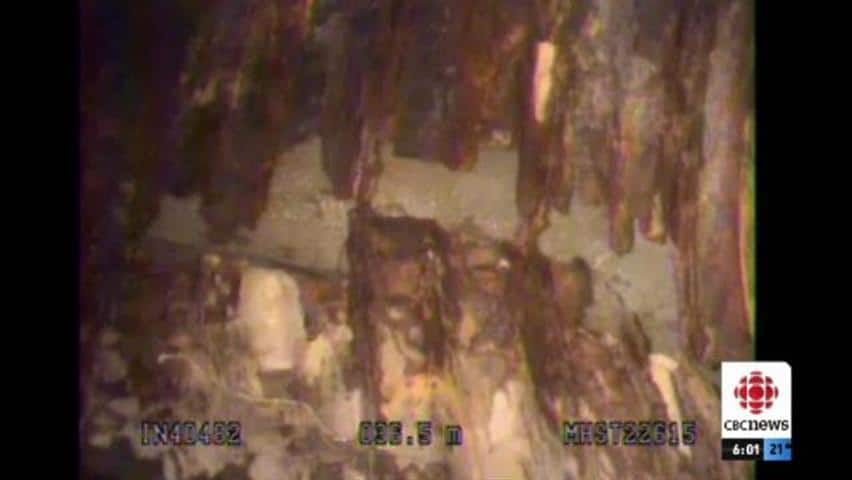 A video taken in 2011 during a routine inspection of the east-end storm sewer that collapsed and caused a large sinkhole in September showed the steel pipe was severely corroded, CBC News has learned.

The inspection took place on Aug. 17, 2011, more than a year before the pavement gave way on the Jeanne d'Arc off ramp of Highway 174, swallowing a car.

The contractor hired by the city, Caesar's Inspection Services, sent a robotic CCTV camera into the pipe.

The video shows the robot struggling over large rocks as it enters the culvert. Then, at the 36-metre mark, calculated by CBC to be directly under the Jeanne d'Arc exit, the robot stops to inspect two large holes, first on the left side of the pipe, where the steel has completely corroded away, then a couple metres farther on the right, where there's a huge gap in the pipe, behind which an alcove of wet clay is clearly visible.

Abd El Halim, a professor of transportation engineering at Carleton University, watched the video. He said if he had done the inspection, he would have made a decision to fix the issue right away.

"That area became a very, very serious point for failure. What's really important is you can see the flow of water, and it's not slow. The water is running with relatively high speed, and as a result it's washing the soil around and underneath, and that's danger," El Halim said.

"I'm telling you, what I see here would require an immediate action," he said, adding that funding, obtaining approvals, more urgent repair priorities and other considerations sometimes mean waiting.

"The August 2011 CCTV condition assessment of the Highway 174 culvert failure indicated that the culvert was in poor to very poor condition, but the assessment provided no indication that would lead to a conclusion that failure of the culvert was imminent," wrote city manager Kent Kirkpatrick in an email statement. "Work to accelerate the culvert repairs was scheduled as a result of this assessment."

The storm sewer collapsed on Sept. 4, swallowing a car.

The highway started to be reopened on Sept. 12.

In October, the city hired B. M. Ross and Associates to conduct an independent root cause analysis of the Highway 174 culvert failure.

The city said it won't offer more comment due to the investigation, the results of which are expected some time in December.