A thief apparently had a change of heart hours after taking items from a home in Guelph, Ont., returning the stolen goods, $50 and an apology letter.

'I can't put it into words how sorry I am,' thief writes in apology letter 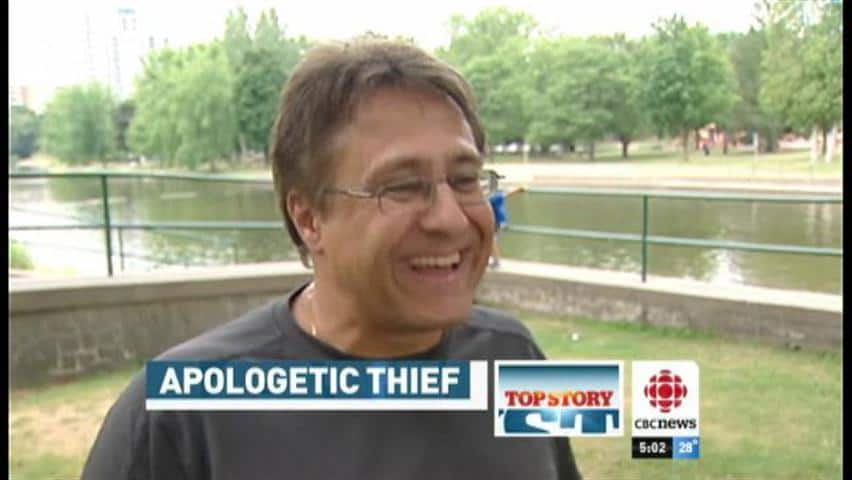 8 years ago
2:38
A thief in Guelph with a guilty conscience writes an apologetic note and leaves it outside the home that was robbed, Lucy Lopez reports. 2:38

A family didn't realize their home had been broken into until they found a bag with the stolen items along with $50 attached to a letter of apology from the thief.

The thief wrote that the burglary was "the worst mistake in my life" and that the money would cover the cost of repairing a screen door broken during the robbery.

A camera and video game console were pinched from the home in Guelph, Ont., last Thursday night, but brought back hours later in a green bag with the letter and apology cash.

"I can't put it into words how sorry I am," the thief explained in the typed note, adding they were having financial trouble.

"This is the first and last time I will ever commit a crime... Please find it in your hearts to forgive the stranger who harmed you."

The note explained the thief felt "ashamed" and would perform at least 15 hours of community service to "partially atone" for the crime.

Guelph police Sgt. Doug Pflug said the items were taken while the family was out walking their dog, but the robbery wasn't noticed until a family member found the bag outside the door the next morning.

Pflug said realizing they'd been robbed was a shock to the family, who asked police not to identify them.

"They were surprised," he said. "They didn't know their home had been violated."

Pflug said police aren't closing the case, but explained the thief's change of heart doesn't mean they'd avoid arrest if found, since they could be wanted on outstanding charges.

"Even though they say this is the first time they've committed a crime, how do you know?" he said.