Ontario Premier Dalton McGuinty is ruling out making deals with other parties, and says he is proud of the 'major minority' his party garnered on Thursday night. 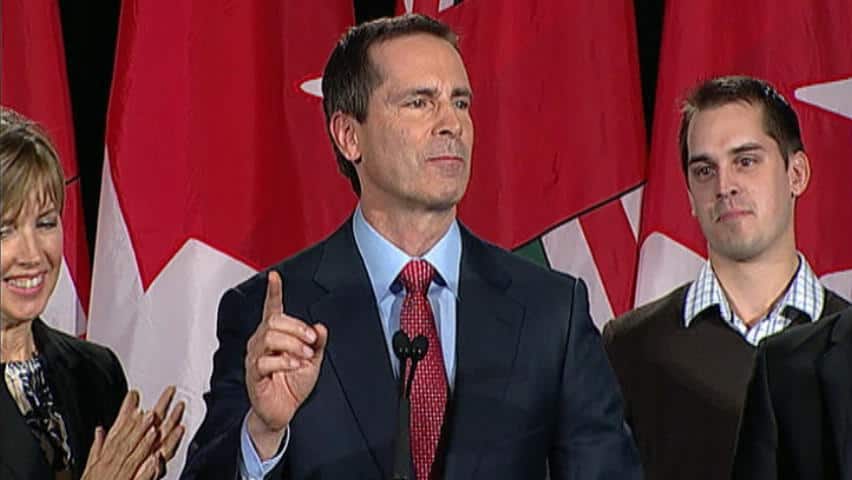 Ontario Premier Dalton McGuinty is ruling out making deals with other parties, and says he is proud of the "major minority" his party garnered on Thursday night.

Ontario shouldn't have a government that's dominated by Toronto and its suburbs, Progressive Conservative Leader Tim Hudak said Friday. "It is not healthy for our province to have a government that's overwhelmingly concentrated in the city of Toronto and its nearest suburbs," Hudak said a day after his party was defeated in the polls. Hudak failed to make inroads in the Greater Toronto Area that his party needed to win the election. The Tories nearly matched the Liberals in terms of the popular vote and expanded its seat count to 37 from the 25 they held when the election was called, Hudak said. "We didn't make the progress I'd hoped for in the city of Toronto and the [surrounding] areas," he told reporters in Niagara Falls. - Canadian Press

"I’m honoured and thrilled to receive the mandate that we have in fact received," McGuinty said at a Friday morning news conference in Ottawa after Thursday's election, in which his Liberal Party came up just one seat shy of a majority.

McGuinty said he wouldn't initiate formal negotiations with either the Progressive Conservatives or the NDP, saying he is convinced the opposition parties will want to support the Liberal agenda.

"So if there is a party that has properly positioned itself to ensure that we inspire the confidence, not only of Ontarians but the other two parties themselves, it’s our party," he said.

He also dismissed talk of of getting a majority through recounts in ridings where the vote was close. "I’m going to proceed on the assumption that we are where we are, which is what I’d like to call a major minority," McGuinty said.

McGuinty said he hopes to form a new cabinet "in the not-too-distant future," without offering specifics.

Dwight Duncan will stay on as Ontario's finance minister, McGuinty said, and one of his first tasks will be to present an economic update and plan.

He also dismissed questions about trying to recruit an opposition member to the Liberal benches, and declined to answer a question about why he didn't make more of an effort in northern Ontario during the campaign.

'No to the status quo'

"I think last night people said no to the status quo.… And I think we all have to pay heed," Horwath said at a news conference in Hamilton.

"I think people want a stable Ontario. And I think it's our obligation to work together to give them that and that's certainly what I'm prepared to do."

PC Leader Tim Hudak said Friday morning that McGuinty would lead the new government "as long as he retains the confidence of the legislature and no longer."

"He should take note, in particular, that it will be awfully difficult for him to get a tax hike through this legislature."

In his remarks, Hudak repeatedly talked about the need for the Tories to work harder to appeal to voters in Toronto and the surrounding area.

"And that work starts today," he said. "And I will work hard in the weeks and months ahead to earn the trust of more Toronto families. And to the city of Toronto, I want you to know that the Ontario PC Party is there to fight for you."

The Progressive Conservatives did not win any new seats in the Greater Toronto Area.

Hudak bristled when asked by a reporter if he would resign in the wake of his party's disappointing showing, saying "of course not."

With all the votes counted, the Liberals have officially won 53 ridings, one short of the 54 needed for a majority, while the Tories ended up with 37 seats. The NDP finished with 17 seats, up from 10 seats, and will be key players in the new minority government.

The Tory and NDP gains came entirely at the expense of the Liberals, the only party not to pick up seats from the other two parties. The Liberals lost 19 seats in all.