Online adoption 'rehoming': Legal loopholes allow children to be given away

The case of a B.C. boy whose adoptive parents gave him away to a Texas woman they found online highlights the issue of "adoption rehoming," which one leading child advocate calls "a fancy way… of saying 'trafficking in children.'" 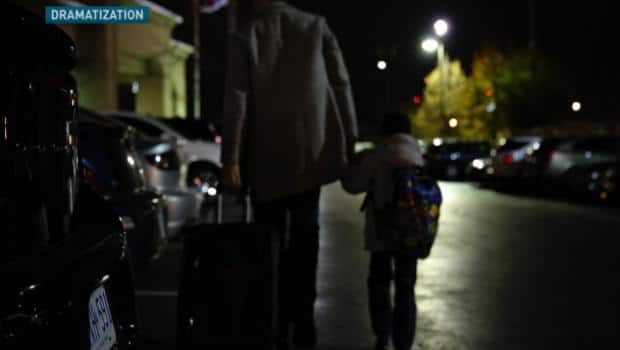 6 years ago
3:09
Unregulated practice of "rehoming" sees some adoptive parents give a child away to a complete stranger over the internet 3:09

In October 2006, five-year-old Moses Gilbert left his home in Castlegar, B.C., to go on a trip with his adoptive dad.

Twenty-four hours later, Moses was given away to a Texas woman his parents had found on the internet but never met in person, according to an investigation by CBC's the fifth estate.

Moses's experience highlights the contentious and continuing issue of "adoption rehoming," which one leading child advocate calls "a fancy way… of saying 'trafficking in children.'"

Moses was an international adoption, brought from the rubble of the Liberian civil war to Canada as a four-and-a-half-year-old in late 2005.

Ian Johnson and his wife, Carol, were looking to adopt a third child, so Ian spent a month in western Africa before bringing Moses home from an orphanage.

The Johnsons initially reported that Moses was thriving in his new home. In an interview with Focus on Adoption magazine in the spring of 2006, they said he was "fundamentally a gentle child."

But as the months passed, Moses became too much to handle, according to the Johnsons. In notes obtained by CBC’s the fifth estate, social workers at the B.C. Ministry of Children and Family Development detail just what the Johnsons were saying.

The couple said Moses was destructive and played with knives and that he'd admitted choking a child to death back in Liberia. The Johnsons also claimed he tried to drown another child in a local swimming pool in Castlegar.

All this from a boy who had yet to turn five.

The Johnsons came to the conclusion that Moses had been a child soldier during the fighting in Liberia. But at the time the war ended, Moses was just two years old.

In the summer of 2006, the Johnsons took Moses to a group in Vancouver that helps victims of torture.

Health professionals soon determined the problem was not with Moses but may have been with how the Johnsons viewed him.

The couple came up with a dramatic solution to their problems with Moses. Carol started going on internet forums and chat rooms, where she found a community of people posting ads about adoptions gone wrong.

Carol posted her own ad with a clear intent: her five-year-old boy was available if someone wanted him.

"She was pretty frantic, and it was clear this adoption was not going to hold," said Sandra Scarth, executive director of Victoria, B.C., adoption agency Choices.

"She had found this woman online and was wanting to move [Moses] down there. Our advice was that you can’t do that. It's not legal. It's not ethical."

There's no way we can tell our side of the story, because people aren't going to understand it.- Ian Johnson

The Johnsons repeatedly declined interview requests by the fifth estate. But when confronted on his doorstep, Ian Johnson defended the couple's decision to give their son away.

"There's no way we can tell our side of the story, because people aren't going to understand it," Johnson said. "We're going to come out just being bad guys. You don't know how hard it was and how much, you know, stress and crying and decisions...

"We were totally frustrated because these people [at the Vancouver support group] are saying, 'You're imagining things.'"

'I was scared… I wasn't going to have a family'

Shortly after posting her message about Moses on the internet, Carol Johnson was in touch with Ambrosia Marvin, a single mother and part-time teacher from Texas who offered to take the boy.

"It was on a Yahoo group," Marvin said. "There were groups for everything under the sun. People who like classic cars, [who] fly airplanes … and there was a group for people who were looking to rehome their children after disruption."

After a few months of emails with Marvin, the Johnsons decided they'd found their solution.

In October 2006, Ian Johnson packed Moses into their car, drove across the border to Washington state and flew to Houston to meet Marvin.

"I didn't know what was happening," Moses told the fifth estate. "One thing I was scared of was I wasn’t going to have a family."

An anonymous tip to the B.C. Ministry of Children and Family Development alerted them to the fact that Moses was missing. Social workers filed a court order, and after three months, Moses was returned to Canada.

The fifth estate requested an interview with B.C's Minister of Children and Family Development to ask why Moses wasn't removed from the Johnsons home earlier, and why no one was ever charged.

The ministry refused to provide any information about the case, citing the family's right to privacy.

Moses's case is a special one. The majority of international adoptions follow proper procedures. But for years, message boards on sites such as Yahoo and Facebook have housed an underground community of desperate adoptive parents and willing takers in a practice known as "adoption rehoming," a term taken from the pet adoption world.

Every city, province and country has differing rules around the transfer of children, which were originally designed as a poverty provision, allowing parents to sign their children over to trusted friends or relatives in times of illness or financial hardship.

But in Canada, there is no uniform requirement for adoption agencies to follow up with children adopted from overseas, which means some kids can fall through the cracks.

Loopholes in provincial custody transfer laws allow parents to give away their children through public forums such as online message boards without any screening or oversight.

"Those transfers happen outside the system for protection for children," says Mary Ellen Turpel-Lafond, the B.C. Representative for Children and Youth and a long-time critic of the system.

"I have deep concerns about this because it might be a very fancy way, comforting way, of saying 'trafficking in children.'"

A Reuters investigation in the United States last year found 5,000 messages online about rehoming children, dating back five years. On one Yahoo group, a child was being offered up on average once a week for five years.

That investigation found that most of the children did end up in homes that seemed better equipped to care for them. But some wound up in situations of exploitation and abuse.

While it is legal to "rehome" children within Canada, it's illegal to send them across the border without proper procedures, says Turpel-Lafond.

Since that Reuters investigation, which won a Pulitzer Prize, Yahoo has shut down its rehoming message sites. Other internet chatrooms apparently still allow them, though they've moved further underground and are now harder to access.

A conversation about regulating rehoming has begun in the U.S., with Congress holding a hearing on the matter this summer.

But there's been no national task force in Canada.

"A case like this just speaks volumes about how it's far too easy [to give away unwanted children]," Turpel-Lafond says. "We need to learn any lessons we can from this to make sure it doesn't happen again."

Once he came back to Canada, Moses was bounced between foster homes for two years before the ministry finally placed him with a family in Cowichan Bay, B.C.

Moses is now 13 years old and has lived with his new parents, Cathy and Dave Gilbert, for five years. The Gilberts can't believe the Johnsons ever feared the boy.

"He has a great sense of humour," Cathy said. "He is very sensitive. He's very loving. And I think he is one of the most resilient and amazing kids I've ever met."