Reality check: Are the Liberal ads on power rates accurate?

Nova Scotia's political parties are going to make many claims over the course of the election campaign and CBC News will try to keep them on the straight and narrow by checking to see if what they tell you is supported by facts.

Checking the campaign claims against the facts 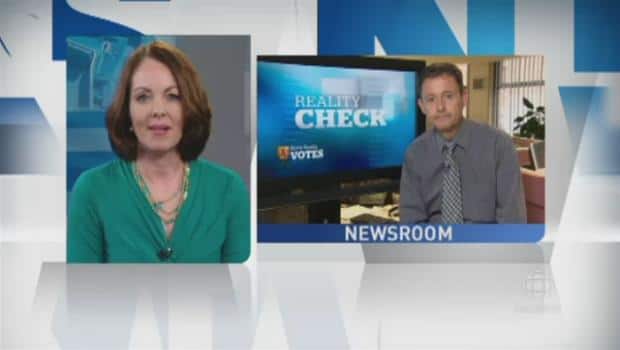 Nova Scotia's political parties are going to make many claims over the course of the election campaign and CBC News will try to keep them on the straight and narrow by checking to see if what they tell you is supported by facts.

At a 40-minute roundtable discussion with the three leaders on CBC News Tuesday, New Democrat Leader Darrell Dexter claimed the Liberals were playing fast and loose with the facts by running "bogus and untrue" advertisements about power rates.

That's a big issue for voters.

"They are running ads that are essentially bogus and untrue," said Dexter. "They talk about things that they attribute to our party which we never said."

Here are some of the claims in that ad:

Nova Scotia does have the highest power rates in Canada, so that's accurate.

"Your power bills have increased over 30 per cent under the NDP."

The claim that power rates have gone up 30 per cent under the NDP is not so accurate — that figure adds the past five years of hikes and includes the rate increase already approved for next year:

The problem is that 9.4 per cent increase in 2009 was actually approved by the Nova Scotia Utility and Review Board in November 2008 when the Progressive Conservatives were in power — eight months before the New Democrats came to power.

The advertisement claims the New Democrats think record profits and the highest power rates are "perfectly reasonable," which comes from a quote from former Finance Minister Graham Steele in May 2012. He was actually talking about Nova Scotia Power's guaranteed 9.2 per cent return on investment.

"This rate is perfectly normal and reasonable for electrical utilities anywhere in Canada or the United States and if they don't get it, then private shareholders are going to say, 'I'm not going to invest in that company,'" Steele said at the time.