Nova Scotia village hosts one of the smallest women's marches, but it's still mighty

More than a dozen women and one man marched for women's rights in the tiny community of Sandy Cove, N.S., (pop. 65) but they've gotten support from thousands around the globe.

Thousands around the globe have taken to Facebook to support the small march in Sandy Cove, N.S. (pop. 65) 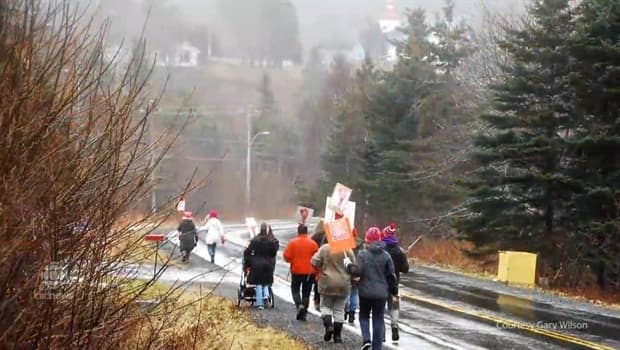 Small march for women in N.S. village gets mighty attention

4 years ago
0:49
Thousands of people around the world are voicing their support for the small march in support of women's rights in tiny Sandy Cove, N.S. 0:49

The village of Sandy Cove, N.S., may have just 65 year-round residents, but its voice is being heard by thousands around the world.

Gwen Quigley Wilson and Melissa Merritt, who both live in the area, wanted to join the millions of people who marched worldwide for women's rights on Saturday, the day after Donald Trump's inauguration.

But it's a 2.5-hour drive to Halifax, where the biggest local march was taking place. So they decided to organize their own march.

But when about 15 people showed up to march on Saturday, "we were ecstatic."

"It just felt like one of those moments in history that you couldn't stand by and passively observe it," she said.

Kadijah Photiades was one of the people who marched and posted a short Facebook video of the group walking along Highway 217 — the only road that runs through Sandy Cove.

By Monday morning, the video had been watched more than 100,000 times and had attracted hundreds of comments. A photo of their march was also featured by The New York Times.

"Predominantly it's love and support and gratitude from women all over the world — and specifically the States, who really appreciate our support," Photiades said.

"One woman said she had looked at all of these marches all around the world, and it wasn't until she saw our little tiny march in Sandy Cove that she actually burst out crying."

'It made my heart very happy'

The group walked between the local school and the fire hall for an hour in drizzly weather, enough time for two boatloads of cars to pass by after getting off the ferry that connects to the communities of Digby Neck.

"Hardly anybody honked, just a few people. We think our signs weren't big enough — we wish we had a sign that said 'Honk if You Love Women,'" Photiades said with a laugh.

Merritt, who grew up and lives in the nearby village of East Ferry, said she has run into a few Trump supporters in the area in recent months.

While Washington, D.C., is far away, misogyny and discrimination affect women everywhere, she said.

"It's really uplifting to be surrounded by people who are like-minded," Merritt said of her fellow marchers.

"It made my heart very happy to have other women stand beside me and do that."