Residents of Westville, N.S., say they're stunned and surprised that the woman known as the "Internet Black Widow" would set her sights on someone in their community. 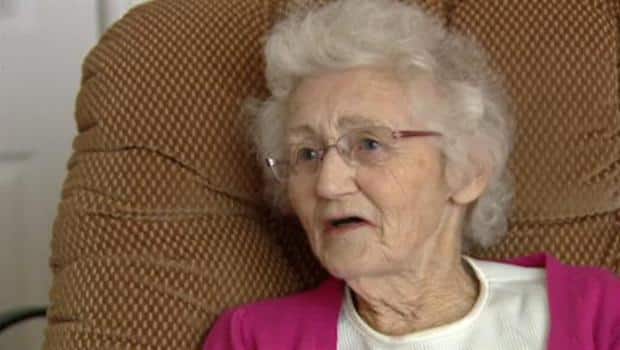 8 years agoVideo
2:09
Residents say they're stunned the "Internet Black Widow" would set her sights on their community. 2:09

Residents of Westville, N.S., say they're stunned and surprised that the woman known as the "Internet Black Widow" would set her sights on someone in their community.

Melissa Weeks, 77, was given the nickname by the media for her ability to persuade grieving widowers to marry her.

She was charged Tuesday with attempted murder and attempting to poison her husband, Fred Weeks, under Section 245 of the Criminal Code, known as "administering a noxious" substance.

"I was shocked. I was really shocked to think that could happen in such a quiet, friendly spot. We all try to be friends," said Helen Fraser who lived in the same building as the Weeks.

Fraser said she and her neighbours eventually learned Weeks' history of preying on unsuspecting widowers.

"I really was worried for him. Yeah, I wondered if he was doing the right thing.  He should have gone easier," she said.

Fraser said she never spoke to Fred Weeks about it and tried to just remain friendly.

"How could you marry somebody and then hurt them before the week was up?"

Melissa Weeks moved into Quinnway retirement village more than a year ago.

Managers said she didn't use her real name at the time. Fred Weeks moved in just a few months ago, four units down from his soon-to-be wife.

Fred returned home Tuesday after his stay in the hospital. His son said his father isn't ready to talk about his relationship with a woman he knew for such a short time.

But at the local coffee shop, it's all anyone is talking about.

"Well, it kind of blows me away. You don't expect a 77–year-old woman to be like this and I wonder why she's still out there.  Why is it still happening? It's our justice system I guess," said Barbara Foote.