Meet two women, one from Halifax the other from Washington, who fell in love after blogging about losing over 100 pounds. 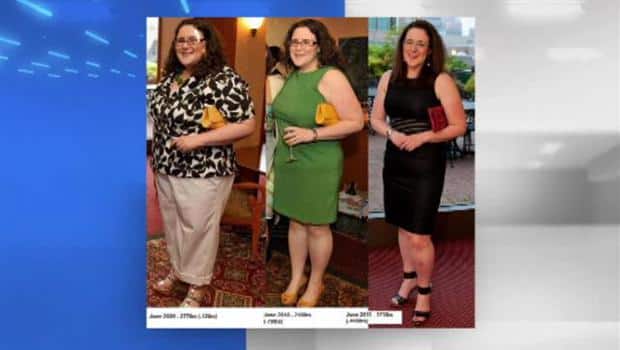 It's the time of year when many people are thinking about New Year's Resolutions and the weight they want to lose. Finding the motivation to stick to it can be hard, but one Halifax couple learned just how far that first step can take you.

Three years ago, Tara Martin and Meegan Dowe were strangers, but they had a lot in common.

Martin lived in Tacoma, Wash., and was closing in on 300 pounds.

"My life was very sedentary. I was addicted to playing World of Warcraft, which is an online game," she said.

Both women decided to change their lives.

Dowe started with a simple goal.

"I work on the fourth floor at the hospital and I just wanted to be able to climb those four flights of stairs to be able to get to my office every day," she said.

Separated by a continent, the two women began similar journeys.

Dowe started with a trainer and soon added running. Martin started by running half a block; she promptly threw up. But she stuck with it and, eventually, Martin ran three minutes without stopping.

"I would get up at early in the morning because I didn't want anybody to see me running. I thought I was the fat girl running and people were going to point," she said. "It was like 4 o’clock in the morning down at the waterfront, and here I am just crying, and I just ran for three minutes."

Both women lost 100 pounds and both started blogging about their experiences. That’s where they connected.

After exchanging emails and Skype calls, the women decided to meet in person in Vancouver. At the time, both identified as straight, but that soon changed.

"It's one of those weird things. You're like, 'We're just going to meet as friends.' Then it was like, ‘Oh, I think I love you,’" Martin remembers.

They went their separate ways and agreed to meet at future run. The relationship developed online.

The next time they met, Martin brought a diamond ring. She tied it to her shorts and figured if it was still there after the race, she’d propose.

It was, and she did.

The couple married and Martin joined Dowe in Halifax.

"The person that I am today was the person I was meant to be," says Martin.

"If I had to talk to the Meegan I was when I started this journey at age 30, I'd say just start with one decision. Just change one little thing."

Now the couple is training for the Bluenose Marathon.

It's a long run, but they said nothing compares to how far they've come.