Halifax's poet laureate asks, 'Would you wear blackface to a Beyonce concert? Why is it okay to wear redface to a A Tribe Called Red concert?'

Halifax's poet laureate, Rebecca Thomas, is speaking out after a group of people attended a A Tribe Called Red concert at the Marquee Club in Halifax on Friday with imitation war paint on their faces.

The electronic group — whose members are Aboriginal — mix hip-hop, reggae and other styles of music with First Nations singing and drumming.

Thomas, who was named poet laureate in April, said she had gone to the bar to get a drink between bands when she noticed three people with "red streaks across their cheeks, and on their chin and their forehead."

She told the CBC's Information Morning she was deeply offended, so she wrote a poem about it. 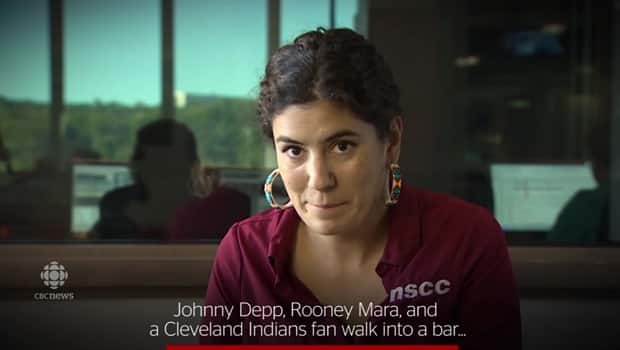 "They're making fun of our culture. They're playing dress-up. They're saying look at us, we're the Indians," she said. "And that's not OK."

"Because we're diverse and we're beautiful and we're still here and to be made fun of like that, it's really insulting."

Demanded to see her status card

Thomas said she and her friends confronted the group and they got upset when she asked them to wash their faces.

They said they were just having fun and explained that their parents were Indigenous, she said.

They also demanded to see Thomas's status card, she said, "as though we had to be card-carrying native folk to be able to challenge what they were doing."

"They don't have the right to tell me as an Indigenous person what I can and cannot be offended by, especially when it comes to my own culture," Thomas said.

She said she felt they were making a mockery of her culture. War paint — like all Indigenous regalia — "has a purpose, it has a significance, it has a meaning," she said, and it was inappropriate to wear it like a costume out of context.

Thomas said her father is a residential school survivor, and he worked hard to pass as much of his culture as he could on to her "and I take that so seriously.

Hoping for an apology

Thomas said she had hoped they would be "earnest and honest, and apologize."

"If you said, 'I'm so sorry, I had no idea, I thought I was just having fun, I'll go wash my face, that's fine.' But then to call out my level of ethnicity as a way to somehow justify what they're doing?"

Blackface is taboo, why not redface?

Thomas wondered why societal attitudes are so slow to change.

"Blackface is taboo. Blackface is incredibly racist and offensive, and yet redface still has this strange kind of OK-ness about it," she said. "But it's not OK."

She pointed to a comment left on her Facebook page: "Would you wear blackface to a Beyonce concert? Why is it okay to wear redface to a Tribe Called Red concert?"