Meet the N.S. man who has owned the same truck for 70 years

Randall Pitman bought this Ford Model T truck at an auction when was 17. At 87, he's still driving it.

At 87, Randall Pitman is driving a truck that's older than he is.

But much like its owner, Pitman's beloved 1927 Ford Model T still has a lot of mileage left in it.

This weekend, the pair will cover more than 600 kilometres winding from Pitman's South Ohio, N.S., home to a vintage truck show in Crapaud, P.E.I., that's expected to draw hundreds of vehicles and their admirers.

This time, the truck will travel on a flatbed, but Pitman has driven it that far in years past. While he could find replacement parts and fix the antique himself if it met trouble on the journey, Pitman cautions that new parts for an old truck don't come cheap. 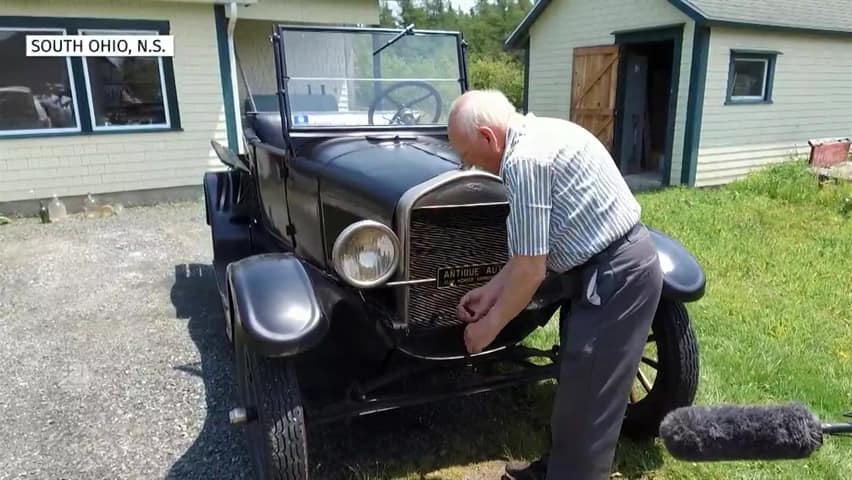 This man has owned the same truck for 70 years

He knew the truck would be coming up for auction and, when it did, he brought his savings and a quiet determination down to the auction house in 1949.

"Eventually, I bid $45 and the auctioneer, as auctioneers do, kept saying, 'Forty-five! Who will give me 50?'" he remembers. "I stupidly said 'Forty-seven fifty,' and he said 'Sold!'"

Pitman's recollections of the truck's history can just barely be made out above the growl of its engine, alive thanks to three twists of the crank in a pair of capable hands.

At each turn in the road, Pitman leans an arm out in his favoured direction; the vehicle hit the streets before turning signals were common.

Pitman's fingers curl around the throttle and the car comes up to speed. It's a smooth manoeuvre that shows off the fusion he's created with a machine after seven decades behind the wheel.

A question about the brakes sparks a laugh and promise that they work. Seatbelts? Not so much.

"You have to see the air conditioning," Pitman says. He cracks a grin, rolls the windows down and opens up the windshield.

Pitman bought another 1927 Ford Model T, a coupe, in the 1960s. He's been restoring it alongside his truck for the last seven years.

And while he's not exactly sure how many kilometres he's put on either vehicle, he's confident they'll all keep rolling along.