Vehicle fires happen, but there's no way to know how many incidents there have been in Canada because automakers aren't obligated to report them, and many Canadians don't know they can report them to Transport Canada.

When Alan Bassett picked up his new 2018 GMC Sierra from a dealership in Alberta on July 19, 2018, he had no idea it would be a flaming heap of metal less than 30 minutes later.

"I heard a pop and my wife, who was driving ahead of me, pulled off [the road] and shouted, "Get Out! You're on fire!" Bassett said. He then pulled over and "watched it burn to the ground."

Bassett, who lives in Turner Valley, Alta., said the fire first appeared under the hood on the driver's side and engulfed the vehicle within three minutes.

"I couldn't believe that something I had paid fifty-some thousand dollars for 30 minutes ago was going up in smoke," he said.

Bassett filed an insurance claim and a week after the fire, GMC told his insurance company to cancel the claim. The automaker made a deal to replace the truck and took it to investigate, but Bassett doesn't know what that investigation revealed.

Transport Canada is the federal government department responsible for vehicle safety. Manufacturers are not obligated to report incidents involving vehicles they manufacture. However, they are required to inform the department and the vehicle owner "when they become aware of a defect that may affect the safe operation of a motor vehicle."

George Iny with the Automobile Protection Association (APA), a national consumer advocacy organization, is worried some automakers make consumer complaints "disappear" by not logging them. He said this keeps the manufacturer blind to patterns that would reveal safety risks they're required to address.

"We can do much better than the situation APA sees today, in which some automakers bury safety-related complaints by not recording them properly and not reporting them to Transport Canada, and misinform other consumers who experience the same problem," said Iny.

Iny pointed to Mercedes-Benz, the Smart car's manufacturer, who told several owners of burnt Smart vehicles that their experience was unique. Iny said the fires were not reported to Transport Canada by Mercedes-Benz, but the APA and CBC News had reports of six vehicles damaged or destroyed by fire.

In October, CBC reported on a New Brunswick man whose 2015 Chevrolet Colorado Z71 caught fire when he was driving it and exploded in flames within minutes of him jumping out.

On Aug. 22, mechanic Jonathan Gillingham was driving his 2015 GMC Yukon XL in downtown Fort McMurray, Alta., when he smelled something and pulled over.

"As soon as I came to a stop, I could see the smoke billowing out of the hood," he said. "As soon as I opened the door and looked under the vehicle, I saw light coming from the engine bay, so I knew there was a fire."

Gillingham said three other drivers rushed to put out the blaze with fire extinguishers, but it did "absolutely nothing, which as a mechanic tells me it's fuel-related in some fashion." 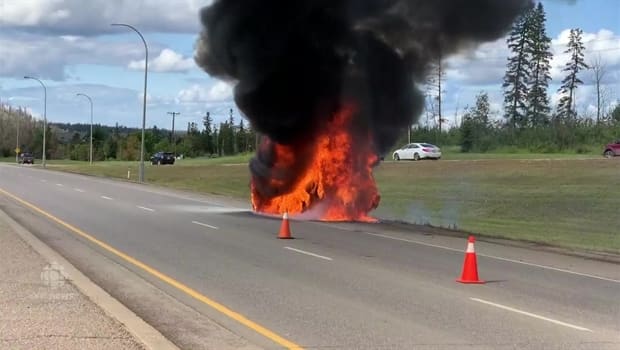 1 year agoVideo
0:13
On Aug. 22, 2019, Jonathan Gillingham was driving his 2015 GMC Yukon XL in Fort McMurray, Alta., when he smelled something and pulled over and got out. The truck was engulfed in flames within three minutes, he told CBC News. 0:13

He said flames shot out of the back window and within three minutes, the truck was engulfed. In 10 minutes, there was nothing left but the vehicle's frame.

Gillingham said the truck is his wife's vehicle that she uses to transport their three kids. He doesn't know if she would have pulled over after smelling something.

"Would it have been a minute later, two minutes later? And if so, how much time would she have had to get my children unstrapped and out of the backseat before there were flames coming out the back window?" he said.

After the fire, Gillingham said he called GMC for six to seven weeks, leaving multiple messages each week. He finally got a response on Oct. 7 from an official telling him the cause of the fire couldn't be determined. The matter was settled through insurance and Gillingham is frustrated the company didn't provide additional compensation.

Shippigan, N.B., resident Maxime Chiasson also had a frightening experience. He suffered second-degree burns to his face and hands when the cab of his 2018 GMC Sierra 1500 Elevation burst into flames in October 2018 as he drove to work on Route 11, the main road in the northern part of the province.

Chiasson, 20, said there was no warning. Instead, flames just "exploded" through the vents and "the entire cab was on fire." He said he slammed on the brakes in the middle of the road and burned his hand as he put the truck in park.

"His first thought was to get out of there as soon as possible," Chiasson's father, Claude, told CBC.

His son, who is not comfortable speaking English, told him he had to use his shoulder a few times to push the door to get it to open.

GMC took the truck, which Chiasson had just purchased in January, to investigate, but ruled the cause was not conclusive. It has offered a few thousand dollars to replace personal items lost in the fire, but the company has declined to offer any compensation for his injuries.

GMC offered little comment on its process for dealing with vehicle fires reported by owners. It did not answer questions about how many other fires it is aware of and whether any of those were reported to Transport Canada.

"We are meeting all our reporting obligations with Transport Canada and continue to work together with them," spokesperson Uzma Mustafa wrote in an email.

Fredericton resident Logan Coffill's 2017 Mercedes C43 went up in flames in April 2019, but his $70,000-plus vehicle was sitting in a parking lot and hadn't been driven for 13 hours. The fire also destroyed the car parked next to it.

"It was very, very surreal," he said. "It was difficult to believe at the time, honestly. I'm still wondering how could this happen in the middle of a cold night with a cold vehicle."

Mercedes declined to answer questions about their process when a fire is reported or whether the company has received any other reports of fires in this model or related models.

"As such, Mercedes-Benz Canada cannot comment on the matter other than to reiterate it stands behind the quality of its products."

Coffill said when he called Mercedes to report the fire, he was told they do not keep records of them.

Neither Gillingham, Chiasson, Bassett or Coffill knew they could report their vehicle fires to Transport Canada for investigation. They assumed their insurance company or fire department would notify the appropriate authorities.

After speaking with CBC, the four filed formal reports. Transport Canada confirms the reports on these fires were submitted by the owners, not the vehicle manufacturers.

Considering the number of cars, trucks and SUVs sold in Canada, vehicle fires are not common, but it's unclear how many of these fires occur each year because not all owners, fire departments and automobile manufacturers are reporting them to Transport Canada.

Iny believes those numbers likely represent only a fraction of the total number of vehicle fires in the country because manufacturers aren't reporting all of them and drivers aren't aware they can report them.

He notes last year's amendments to the Motor Vehicle Safety Act give the government powers to require more reporting of safety complaints. However, the regulations needed to implement that process are not yet in place and can sometimes take years to develop.

He said mandatory reporting is a delicate balancing act, since Transport Canada has limited staff and over-reporting of non-safety incidents will bog them down.

Iny said it should be mandatory to report vehicle fires involving the total loss of the vehicle, whether the cause is determined/undetermined.

Iny said the government could take a big step in the right direction if insurance companies had a duty to report safety complaints to Transport Canada.

Right now, there's no requirement they do that. Iny said in some cases they "actually impede investigations by making a damaged vehicle inaccessible to outside investigators working for the consumer."

In other instances, Iny said they have the vehicle destroyed before third parties or government can examine it.

"The behaviour is often cost driven: insurance adjusters are incentivized for selling vehicles quickly to save on storage costs and make their revenue targets," he said.

In other cases brought to the APA's attention, Iny said insurance companies conclude the claim is related to a vehicle defect, but settle out of court with the automaker confidentially, meaning the insurance company collects their money from the manufacturer, but doesn't report it to Transport Canada.

Claude Chiasson said one vehicle fire "is too many" and he's speaking out so nobody else has to go through the same thing.

"That was my son and he is the most important thing we could have lost that day," he said.