A rare sea turtle that washed ashore in Halls Harbour, N.S., is being nursed back to health after surviving in waters that are typically far too cold for the species.

The Kemp’s ridley sea turtle, nicknamed Eric by those who found it, is hypothermic and very thin 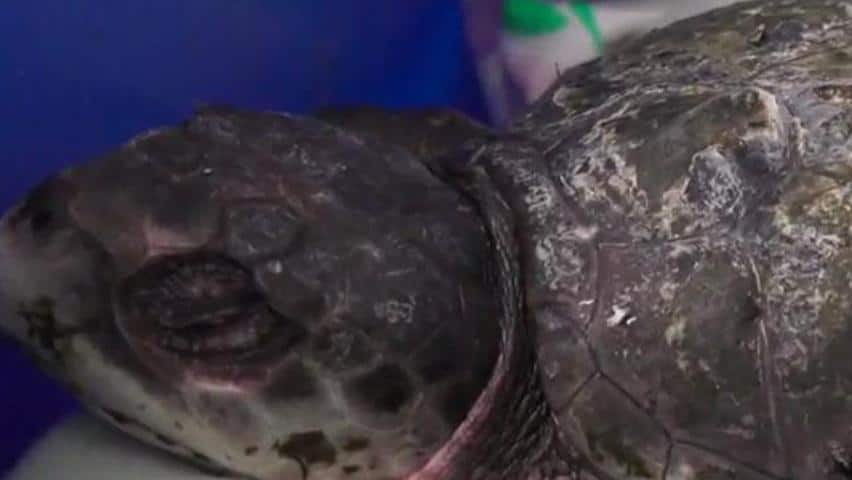 5 years ago
3:05
A critically endangered turtle was rescued earlier this week in Nova Scotia. 3:05

A rare sea turtle that washed ashore in Halls Harbour, N.S., is being nursed back to health after surviving in waters that are typically far too cold for the species.

In fact, this is the only documented Kemp's ridley sea turtle ever be found alive in Nova Scotia.

"There have only been 13 Kemp's ridley turtles recorded in the history of Atlantic Canada," said Kathleen Martin, executive director of the Canadian Sea Turtle Network.

The network is a non-profit group that strives to protect and preserve endangered sea turtles.

Martin says Kemp's ridley turtles are one of the most endangered sea turtles in the world, with a nesting population of only a few thousand.

Born in more southern waters, Nova Scotia is the very northern edge of where the turtles travel when juvenile. Once fully grown the turtles tend to live in the warmer waters of the Gulf of Mexico.

The turtle, which has been nicknamed Eric, was extremely hypothermic and emaciated when he was found.

"There's a special thermometer that's used to test for hypothermia and the lowest end of it is 60 F. When we tested Eric the first time he wasn't even on the thermometer, he was lower than that," said Martin.

"So very cold in the core of his little body."

In the above video, veterinarian Chris Harvey-Clark examines the turtle and gives him injections to aid in his recovery.

The turtle is a little under 26 centimetres long. If he makes it to adulthood he could grow to 60 centimetres.

The little reptile was given the name Eric by staff at Halls Harbour Lobster Pound and Restaurant who found him. But the turtle is too young to determine what sex it is.

Hope Shanks, an administrator at the Lobster Pound, helped find the turtle. She and other workers often clean up the surrounding beach. Earlier this week, she spotted a tote that had washed ashore and asked co-worker Les Roy to remove it.

"When he came back he wasn't carrying a tote, he was carrying a sea turtle, and we at first thought he was dead. But when Les moved him, he opened his eyes. He was awake but very, very, weak."

'A chance at living'

Workers weren't sure what to do with the turtle so they put him in a holding tank filled with seawater.

Then Shanks took pictures of the turtle and sent them to her boss, who eventually got in touch with the Canadian Sea Turtle Network.

"One of the things I love is that it was just the people at the Lobster Pound doing the right thing," said Martin. "They patrol the beach to try and clean up debris that they find there. By doing that they are giving this critically endangered species a chance at living."

The turtle is now in the care of veterinarians with the sea turtle network. Martin says Eric is gradually warming up and has started moving.

"He was swimming around a little bit yesterday afternoon and he was more active than I worried he would be. He was perkier. He's certainly showing signs of life and a little bit of spunk."

Still, vets say the turtle has an uphill battle ahead of him and it's not clear if he will continue to be the only member of his species to survive a trip to Nova Scotia.