Fatal wild bird disease suspected to be back in N.S.

Trichomonosis is caused by a microscopic parasite transmitted from bird to bird through moist bird seed, damp areas and bird baths.

The parasite infects a bird's upper digestive tract, liver and lungs, making it difficult to eat and breathe.

"So far, it's a little worrying when you get four reports in less than 48 hours. So we know that something is happening in the environment. We're just waiting to see how severe it's going to be," said Currie.

"We're at the very beginning of what we think could be an outbreak."

"It's a fatal disease," Currie said. "They aren't going to recover. Usually when people find them, they're quite approachable, very tame and obviously puffed out. These birds are very lethargic and they don't like to move too much.

"They're probably on the verge of perishing at that point."

Hummingbird feeders can stay up, as the parasite doesn't appear to affect hummingbirds, Currie said.

On Friday, Jeannie Fraser spotted a male purple finch in her yard in Ben Eoin, with regurgitated food on its face — a sign of the disease. She didn't have a feeder out.

Fraser said she got fairly close to the bird to take photos before it flew into a tree. She tried to catch the bird with a net later in the day when it came back to her deck, but it evaded her.

"He wasn't very energetic, but he had enough stamina to avoid me," said Fraser. She looked around her property for the bird, but hasn't seen it since.

"The video shows where it's trying to swallow. It's horrific," she said. 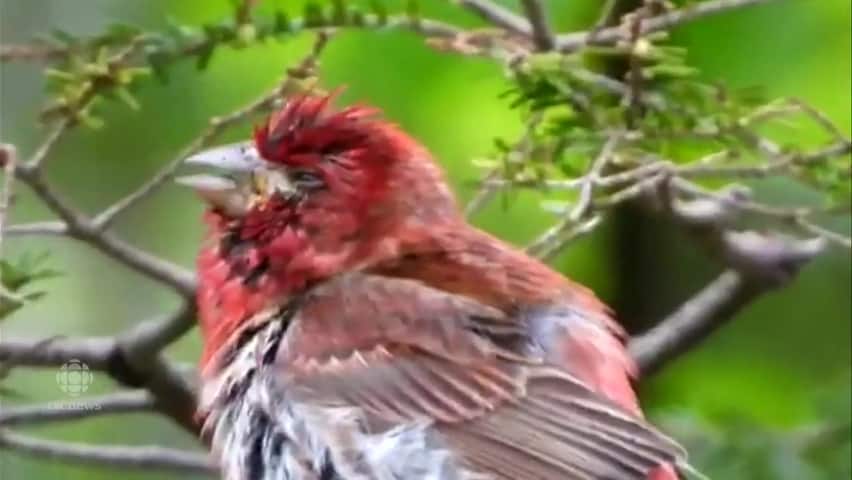 Fatal parasite affecting wild birds may be back in N.S.

"He probably didn't survive the night."

Reporting the location of sick or dying birds to wildlife cooperative will help assess the severity of the disease this year, said Currie.

If residents find dead birds, the bird society suggests freezing them and contacting the Department of Lands and Forestry, which will send them to the wildlife cooperative for analysis.

The number of cases of trichomonosis were mild last year compared to 2017, when more than 100 cases were reported and 18 cases were confirmed.

Currie estimated thousands of birds died from the parasite in 2017.

The parasite has been present in Atlantic Canada since 2007 and reports typically begin around mid-June. The disease doesn't affect humans or other animals, but can spread to domestic birds and chickens.

"It's just in the early stages of us knowing about this disease," said Currie.