A prominent member of Halifax's transgender community is speaking out after finding homemade signs placed on a road in Burnside that made jokes about transgender people and contained offensive words.

'If you're going to spread words, why spread hate?' says Chris Cochrane 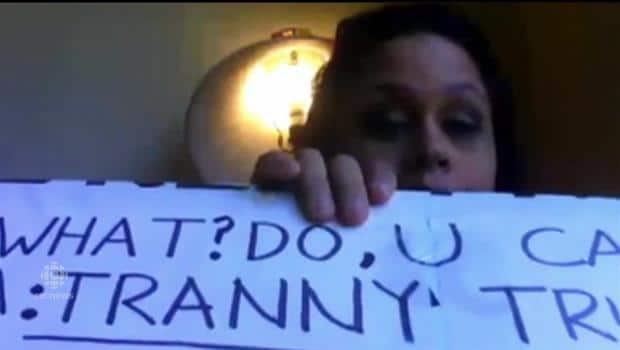 A prominent member of Halifax's transgender community is speaking out after finding homemade signs placed on a road in Burnside that made jokes about transgender people and contained offensive words.

Chris Cochrane and her boyfriend were driving Saturday afternoon on a busy highway outside the Burnside Business Park when she saw two white, cardboard signs in the median.

"I'm very secure with who I am and this made me feel like a second-rate citizen," she said in a video she posted to her Facebook account.

The signs made jokes about the word trans and used the word Tranny, an offensive term for transgender people.

"If this had the N word or if it had have been something like 'Kill the police,' or something against another race or religion, people would be up in arms," she said in the video.

The signs were doublesided, taped together and numbered in the corners.

"There was a conscious decision [to make these signs]," said Cochrane in an interview with CBC News.

This is not the first time Cochrane has encountered transgender discrimination. In 2011, she suffered a gunshot wound to her right arm, an attack she said occurred because she is transgender.

Cochrane is a well-known performer with the stage name "Elle Noir." She is comfortable with her identity, but says the signs would be hurtful to someone struggling with transitioning.

"And I would hate to be that person thinking the world is against them, and coming down the street and seeing this," Cochrane told CBC News.

She says the signs were water damaged, which means they were likely outside since at least yesterday because that is when the most recent rainfall occurred.

'It's not something you can change'

In recent months, there's been a more public discussion of transgender issues thanks in part to Caitlyn Jenner, and Cochrane feels this may be a pushback response.

Cochrane says her message to anyone transitioning is to talk to someone you trust.

She also says there are a lot more resources and support systems in place today compared to when she was younger.

Cochrane also has a message to the person who made the sign – learn to have respect for people who live differently from you.

"If you're going to spread words, why spread hate?" she told CBC News.