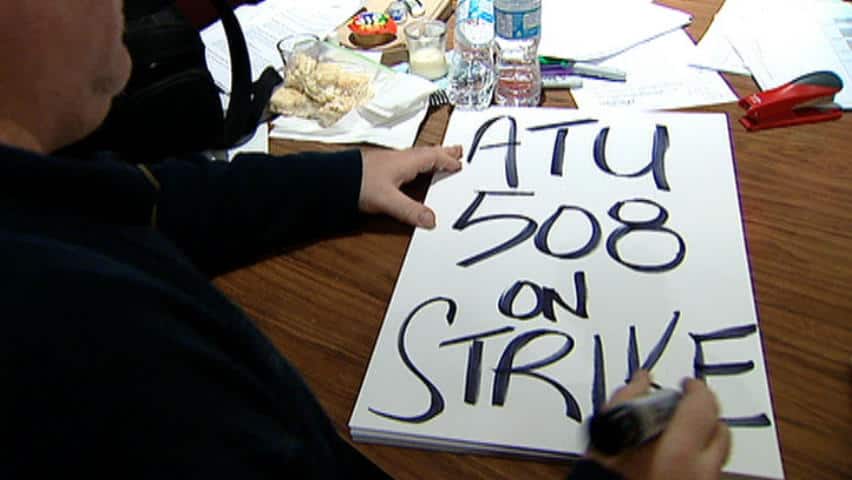 9 years agoVideo
1:50
Haligonians are without transit service for the first time in 14 years after the city's bus and ferry workers went on strike, CBC's Tom Murphy reports 1:50

More than 700 workers walked off the job just after 1:30 a.m. on Thursday, after union representatives rejected Metro Transit's latest proposal.

The rejection came after a last-minute bargaining session, as both sides of the contract dispute were called back to the table less than an hour before the midnight strike deadline.

On Thursday, both Metro Transit and the Amalgamated Transit Union stuck to their respective messages.

"We understand the importance of public transportation," said Ken Wilson, the president of Local 508 of the Amalgamated Transit Union.

"It's blatantly obvious that the mayor and the 23 councillors do not understand the importance. If they did, they would have kept us at the table."

MAP | Add yourself to our carpool map.

By 6 a.m., many regular bus riders were walking across the bridge spanning Halifax harbour.

Scott Weldon got up early to park his car in Dartmouth so he could walk to his office in downtown Halifax.

"Let's settle it quick," he said of the strike. "There's really no place for me to park and it's going to get trickier as time goes on."

Gig McMullin, 62, said public transit should be an essential service.

"What is happening to all these people who need to get to work and don't have vehicles? They're stuck or could lose their jobs over this. That's the sad part," McMullin said.

"Any discussion of this on either side actually upsets the balance that is there between the city and their workers. They have a situation that they need to deal with and I encourage them both to deal with it," he said.

Metro Transit said during its last meeting with the Amalgamated Transit Union, it presented one offer that included rostering — where shifts are scheduled in weekly blocks — and a six per cent wage hike over three years.

A second offer included no rostering and a wage hike of 3.5 per cent over three years.

YOUR VIEW | Tell us your transit strike story.

Union representatives walked out of the meeting less than 10 minutes later.

Wilson said transit workers want to keep the flexibility they have now when it comes to scheduling. Currently, bus drivers can pick different shifts to make up a week, based on seniority.

"Over 80 per cent of my people are divorced. The flexibility in picking our work is what keeps people sometimes together, it's what allows a single parent to be involved in a child's life," he told CBC News.

The transit service said it can save money by following a rostering system.

"What we're asking the union to do and our opinion is that we let the union vote on which one they prefer," said Eddie Robar, the director of Metro Transit.

"We are asking them to take both offers to their union and have them vote on which one they prefer."

Earlier Thursday, Kelly said he was disappointed it came to this.

"If we did this to the public, we'd be fired," he said. "The mayor, council, you're going to have one bad day."