On the first full day of the Nova Scotia's election campaign the Progressive-Conservative leader vowed to stop corporate bailouts for failed businesses. 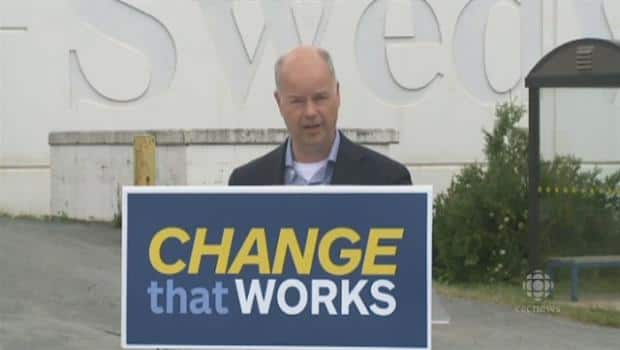 7 years ago
2:27
Jamie Baillie spoke at Scanwood. He called it an example of theNDP's failed policies 2:27

On the first full day of the Nova Scotia’s election campaign the Progressive-Conservative leader vowed to stop corporate bailouts for failed businesses.

Speaking in front of the old Scanwood furniture factory on Sunday, Jamie Baillie was critical of NDP Leader Darrell Dexter’s record on "giveaways" to businesses.

"It's a system of economic development that no longer works, if it ever really did," he said.

He said Scanwood is an example of the government’s history of loaning money to failed businesses.

The province loaned Scanwood, which made Ikea furniture,  $4.6-million in 2010 and the company was later placed in receivership.

Baillie said he would eliminate the multimillion-dollar Nova Scotia Jobs Fund, previously known as the Industrial Expansion Fund, which hands out money to businesses to spur job creation.

The Tory leader referred to it as a "cabinet controlled slush fund."

Baillie said the NDP hands out roughly $89 million annually to businesses and that money would be better spent reducing the harmonized sales tax.

Dexter campaigned in Halifax on Sunday where he rebutted Baillie’s comments.

"The reality is nobody likes giving money to companies, but the reality of the world we live in is that we compete. We compete for jobs globally. We have to be prepared to do that or we have to be prepared for Nova Scotia to continue where it has been for the last 20 years. We don’t think that’s acceptable," he said.

Nova Scotia voters will head to the polls on Oct. 8.