Time capsule in a bottle washes up in Nova Scotia

When Jillian Boyce and Kelly Johnston stuffed a letter and some trinkets into a bottle and sent it down the Shubenacadie River in 2002 they could only hope someone would find it. On Wednesday, the piece of their history washed back into their lives. 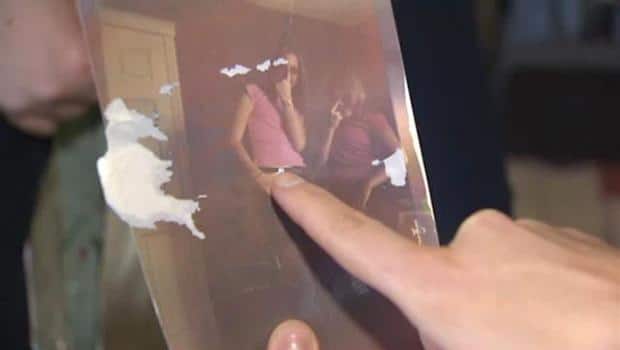 8 years agoVideo
2:52
Two Nova Scotians were fishing over the weekend when they spotted something unusual. 2:52

When Jillian Boyce and Kelly Johnston stuffed a letter and some trinkets into a bottle and sent it down the Shubenacadie River in 2002 they could only hope someone would find it.

On Wednesday, the piece of their history washed back into their lives.

Stephen Hennigar and Alexa Wray were fishing for striped bass on the river over the weekend when they spotted something floodwaters had left behind.

"It looked like somebody just stuffed a bunch of garbage in a bottle," Hennigar told CBC News.

The message from Jill and Kelly:

Hello whoever may find this!!!!

Our names are Jill and Kelly and we thought it would be fun to send a letter in a bottle.

Things that are going on now are: Osama Bin Laden is a wanted man. And not too long ago the World Trade Centres collapsed. So we can't let things like this go on any more.

What about our futures? Personally we're looking forward to them. When I grow up I want to be a fashion designer because I love to draw and paint and some day I'll be what I've always wanted to be, I know it!!!!

And if I could meet any famous persons it would be Kirsten Dunst and Josh Hartnett and Jim Carrey. I think it would also be so wicked if I could be an actress. I love to be in the spotlight and on camera so if you're a director, search for me!

I (Kell) would like to meet Jennifer Lopez, Freddie Prinze Jr. or Julia Roberts. I love the movies they are in and am a big fan of them all. I don't really know what I want to do in the future yet, but I plan to go to a good university some day.

Thanks a lot. I hope you listen to our letter. Thank you.

They smashed the bottle to get a look at what was inside.

"I was excited. I was really excited. Then I brought it back in the house, I put the glass in a cardboard box because I didn't want to get it all over the house," said Wray.

"Then we just started pulling the stuff out and looking through it."

Inside the bottle was a letter, written in pink, from two teenaged girls named Jill and Kelly.

"Things that are going on now are: Osama Bin Laden is a wanted man. And not too long ago the World Trade Centres collapsed. So we can't let things like this go on any more."

The bottle also includes some photos of the girls and some friends. There are mementoes and trinkets, plus a coupon from New Brunswick that expired in 2002.

Hours after CBC News first aired the story of the bottle, the two women who released it more than a decade ago came forward.

Jillian Boyce said she never expected the phone call from a friend who had heard the story on CBC News.

"I never really expected anyone to find it. I just thought that's awesome. My younger self would've just tried to plan this moment."

Johnston now lives on P.E.I. and she was thrilled to learn about this discovery.

Boyce and Johnston, both now 25 years old, said they spent an afternoon as teenaged girls filling an empty wine bottle with photos and a letter.

Boyce said she has never forgotten the bottle, but seeing the contents again was a huge surprise.

When she was 13 years old and putting her note in the bottle, Boyce said it was important to follow her dreams.

"When I grow up, I want to be a fashion designer," the young Boyce wrote.

"I went to [Nova Scotia College of Art and Design] thinking that's what I would do is fashion. I've since started painting and everything like that," she said Wednesday.

The bottle didn't go as far as they hoped, but it survived winters through snow, rain and sun.

"This is what makes it so special. You can text and call and there's all these immediate ways of getting a hold of people, but there's something really nice about the old fashioned way of doing things," said Boyce.

Johnston said the women will see each other again this summer at a wedding.

"I haven't seen Jill in many, many years. It's crazy to think that after all this time a silly letter in a bottle could put us back in touch," said Johnston.