A new observatory is officially opening in southwestern Nova Scotia Friday night to give people an opportunity to learn about astronomy through the eyes of a man who is legally blind. 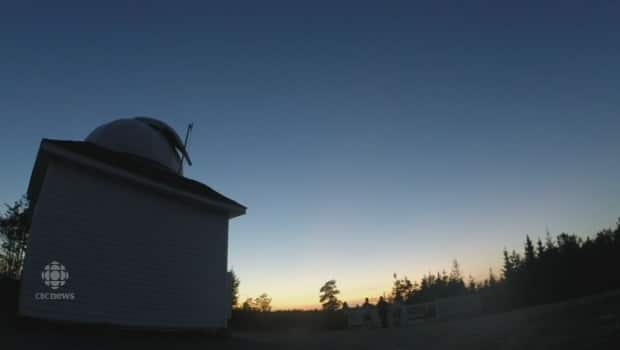 It took the Doucette family two years to build the Deep Sky Eye Observatory on their property in Quinan, N.S.

4 years ago
0:51
A new observatory is officially opening in southwestern Nova Scotia Friday night to give people an opportunity to learn about astronomy through the eyes of a man who is legally blind. 0:51

A new observatory is officially opening in southwestern Nova Scotia Friday night to give people an opportunity to learn about astronomy through the eyes of a man who is legally blind.

"For me, I've always relied on other people," said Tim Doucette, owner of the Deep Sky Eye Observatory in Quinan.

"But now, other people are relying on me to help them view the night sky, so that's kind of a great feeling, to show somebody something else that makes them excited."

Doucette was born completely blind. He had surgery when he was a child to remove the lenses of his eyes, giving him about 10 per cent of average vision.

He has to wear sunglasses even on cloudy days because his pupils are permanently dilated.

But Doucette discovered his disability gave him an incredible ability — he can see objects in the night sky with remarkable clarity.

"Because the lens of the eye is a natural ultraviolet filter, I discovered that I can see ultraviolet light, so looking through a telescope I can see things better than you would," he said.

"I'm probably the only person that I know of on the planet that can focus a telescope with no eyepiece right on the back of my retina."

Doucette's special vision has inspired a passion for the night skies.

"Looking through a telescope is literally another world for me."

He started to share his knowledge when he was living in Moncton, N.B., where he opened up a small backyard observatory. But two years ago, Doucette and his wife, Amanda, decided it was time to move home to Quinan, just outside of Yarmouth.

That's when he planned to turn his backyard hobby into a tourist destination.

Over the last two years, Doucette has enlisted the help of his brother and father to construct a real observatory.

They collected wood from an old cottage being demolished and managed to find free fill. At the centre is his pride and joy, a Celestron 14-inch Edge HD telescope in a nine-foot dome.

He spends hours exploring every night.

One of his favourite views is the Omega Nebula, also known as the Swan Nebula.

"For me, I'm able to see not just the shape of the swan that it makes, but a little further back where the wings would go, so most people won't really see that unless they're experienced stargazers."

The observatory is ideally located in an area with few towns and little industry, where there is hardly any light pollution, offering stargazers the darkness they need to see the stars.

Doucette is hoping his observatory, which can hold 10 people at a time, will help draw tourists to the area.

It's already working. Doucette started running trials of his observatory in the spring. So far, more than 150 people have dropped by from places around the world.

On Wednesday, two carloads of visitors from Germany showed up unexpectedly. Doucette never turns people away.

"The sky is dark, so dark. If there is no moon, it's so totally dark, and then you can see the stars. Then you can see the Milky Way coming out of the lake," said Siegfried Piepenbrock of Hanover, who compared the night view to one in Africa. "It's so beautiful. We cannot find it in Germany. We don't have it like that."

Doucette already has big dreams to expand his little business. He's hoping by next year he'll be able to offer a camping experience under the stars.

"We've always enjoyed sharing the night sky with people. This is just an extension of that. Our mission is to take people on a journey through the cosmos, and to encourage them to look up and to have a new appreciation for our little blue, our little blue dot we call home."