Hundreds of demonstrators gathered peacefully in front of Cape Breton Regional Police headquarters to rally against racism and police brutality in the wake of the death of George Floyd.

'Racism is everywhere, it’s not just in the States, it’s here in Canada,' says Darnell Kirton

Hundreds of demonstrators gathered in Sydney, N.S., last night to protest the death of George Floyd, a black man who was killed while being arrested by Minneapolis police.

The peaceful protest was held in front of Cape Breton Regional Police headquarters. Police estimate over a thousand people attended despite the rain.

The event was organized by Whitney Pier resident Darnell Kirton. He said he was amazed by the turnout.

"I am in complete awe, I did not expect that many people to show up to something I only started three days ago," said Kirton.

Kirton, who has experienced racial profiling by police in the United States himself, said he felt compelled to organize the protest.

"Racism is everywhere, it's not just in the States, it's here in Canada, we all experience it, we can't turn a blind eye to it any longer, we need to speak up about it." 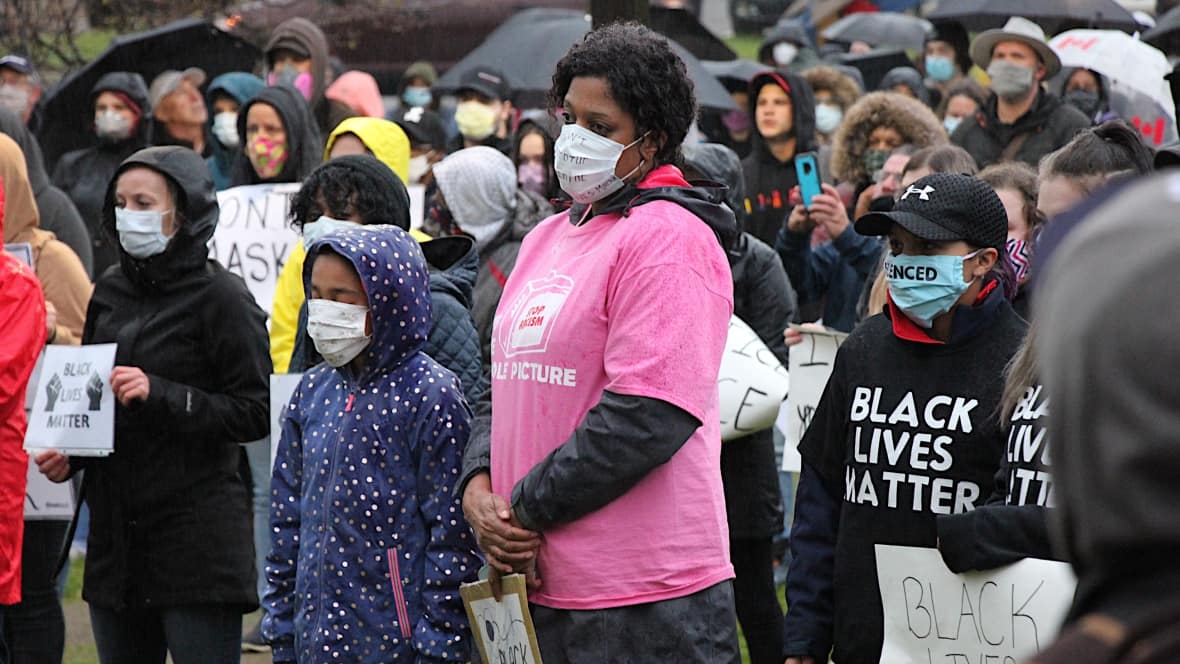 5 months ago
1:53
Hundreds of demonstrators gathered peacefully in front of Cape Breton Regional Police headquarters to rally against racism and police brutality in the wake of the death of George Floyd. 1:53

The protest included several speakers including another Whitney Pier resident Selah Best. Best shared her experiences as a black woman as well as her concerns for her children.

"What broke my heart about [George Floyd] is when I saw… him take his last breath, I saw my son, when he cried for his mother, I heard my son crying for his mother," said Best.

"I do not want to have to teach my children that because of the colour of their skin that the law will not protect them the same way and that justice will not be the same for them."

Members of Membertou First Nation also attended in solidarity with demonstrators, including Jeff Ward, the manager of Membertou Heritage Park.

"It's our land and everybody who lives and plays and works is currently on indigenous land… so it's important that we be part of it too," said Ward, adding that the Mi'kmaq community faces similar issues when dealing with police.

Protesters at a Black Lives Matter demonstration took a knee for nine minutes - approximately the length of time a police office pressed his knee into George Floyd's neck. <a href="https://t.co/UNg42k9loV">pic.twitter.com/UNg42k9loV</a>

Cape Breton Regional Police took part in the protest itself. Deputy Chief Robert Walsh spoke to the crowd and took a knee with the demontrators.

"I want you to know that I see you, I see your grief, I see your frustration and I see your anger over social injustice and I share my voice with you against anti-black racism," said Walsh.

Walsh said he has an obligation to speak out against social injustice. He spoke directly of the police officers in Minneapolis, saying they need to be held accountable. All four officers involved in the killing of George Floyd have now been charged.

The protest ended with demonstrators taking a knee and chanting 'I can't breathe' for nine minutes, approximately the length of time police officer Derek Chauvin pressed his knee into George's Floyd's neck.