More than 300 students lined up Tuesday for their chance to spend a few minutes with therapy dogs at Dalhousie University in Halifax. 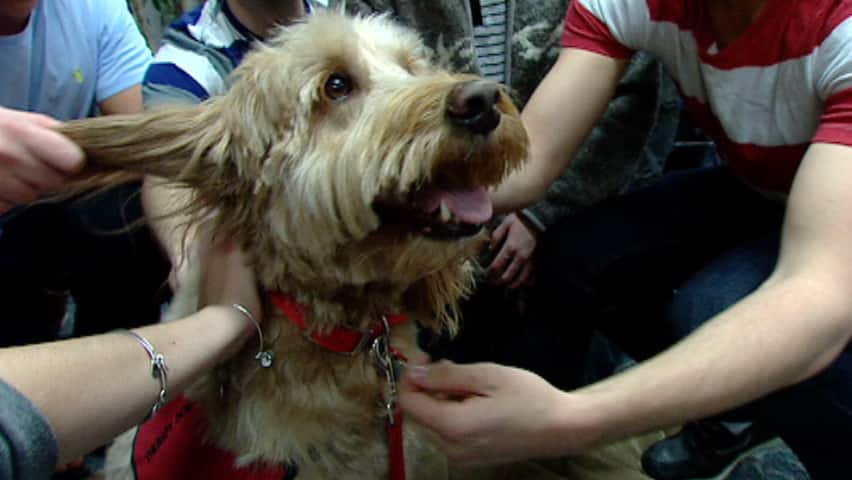 More than 300 students lined up at the Halifax university Tuesday for their chance to spend a few minutes with therapy dogs. Through the afternoon, the wait to get into the university's new puppy room reached nearly 45 minutes.

The student union decided to offer the program after one student suggested it on an online forum. The plan was to give students a few minutes to relax with their new fuzzy friends and forget the stress of this month's exam period.

"We just saw one dog and the whole atmosphere lifted," said a grinning Jennie Evamy-Hill. The student beamed at the thought of spending a few minutes with a four-legged canine. "I'm not a cat person, I like dogs more."

Evamy-Hill left her two dogs at home when she went to school. She said she missed the company an animal offers.

"It's definitely a taste of home before I go back."

As the doors opened, students crowded around different dogs, each taking a turn hugging and patting the animals. The dogs ate up the attention.

"It's better than studying," said Sue-Ellen McInnis. "I'd rather be here than the library."

While the animals were actually fully grown trained therapy dogs, the idea for the so-called puppy room spread quickly on Twitter, inspiring other schools to consider starting their own animal therapy project.

Donald Le Blanc, the team leader in charge of the dogs, said he wasn't surprised by the overwhelming joy in the room after his own history with dogs.

"I personally suffered from depression most my life, and when I got my first dog about 12 years ago now, he made a tremendous difference in my life. He brought me out of my shell," Le Blanc said.

He said the dogs and students were a natural fit, and the dog owners were happy to help them out.

The puppy room is scheduled to be open for three afternoons.