At the request of the Speaker of the Nova Scotia legislature, the former finance minister has formally cleared up a political debate over whether he deliberately misled the house. 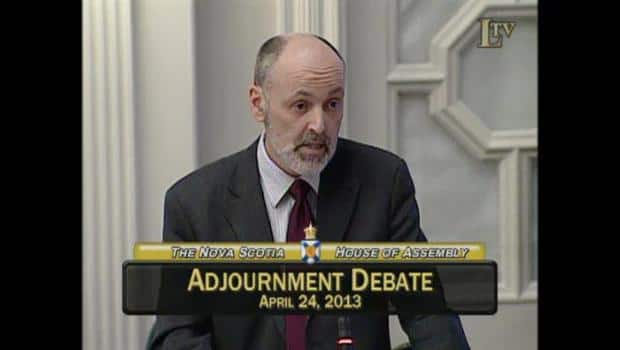 Former Nova Scotia finance minister Graham Steele says he did not mislead the legislature when he tabled an inaccurate budget deficit figure in the spring of 2012.

At the request of the Speaker Gordie Gosse, Steele rose to address the issue in the legislature for the first time on Wednesday night to formally clear up a political debate over whether he deliberately misled the house.

The backbench member stood on the floor of the house to make the address.

"Let me say plainly and directly. There was in the presentation of last year's budget absolutely, positively no intention on my part to mislead the house," Steele said.

He had previously said outside of the house that he did not mislead the legislature when he delivered a budget last year that overstated revenue estimates by $27 million. But that didn't satisfy the Speaker.

Steele said he presented figures that had been established before a March 1 cut-off date and that had been verified by provincial Auditor General Jacques Lapointe.

In his February report, Lapointe said the government delivered a deficit forecast of $211 million when it was aware the actual figure was $238 million.

Earlier this week, Liberal Leader Stephen McNeil tabled a motion to send the issue to a committee for further review, but NDP members in the legislature defeated the motion.

Steele also bid an emotional farewell to Province House in what may have been his last address.

"I am proud of what I have been able to accomplish as a member of this house for the past 12 years," he said.