Nova Scotia MPs are under lockdown after a soldier was shot at the War Memorial in downtown Ottawa.

Members of Parliament released after six hours barricaded in offices 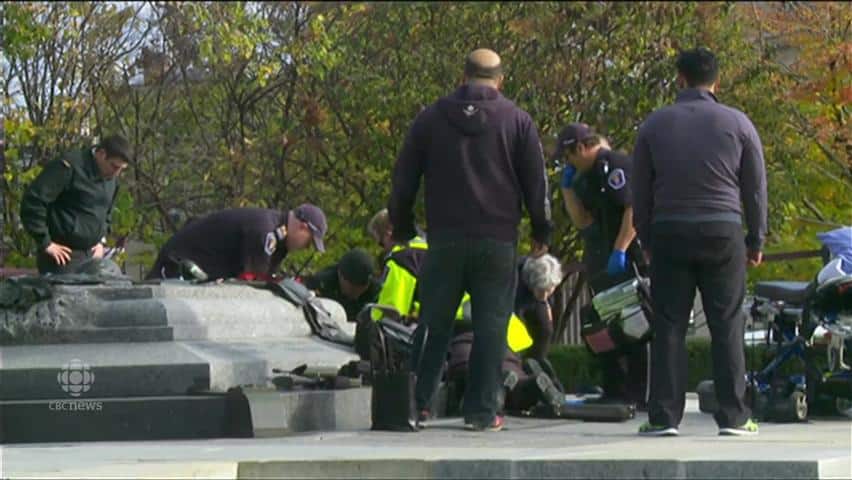 6 years ago
0:30
Bystanders and first responders were performing CPR on a shooting victim at the War Memorial. 0:30

Halifax MP Megan Leslie said she had "no time to feel anything" when Parliament Hill was locked down after a soldier was shot and killed at the War Memorial in downtown Ottawa.

Leslie said she and her NDP colleagues heard "echoey banging" as they met for their weekly Wednesday caucus meeting on one side of Parliament Hill's Centre Block.

"A security guard came in immediately to our room, he barricaded the door with his body and he motioned for us all to get down," she said Wednesday afternoon after being let out of the building.

"He made a hand signal like a gun and that's the first time I realized that those noises, that was gunfire. And it just kept going and going."

Leslie said she was in the room for about six hours in what she described as a "really scary" day.

"There was no time to feel anything. We just did what we were told. We got down, we then quietly tried to barricade doors with chairs, with whatever we had around us. And we waited for security to tell us what would happen next," she said.

"There wasn't much thinking in that moment. It was afterwards where it really hit home."

Sydney-Victoria MP Mark Eyking told CBC News he and about a dozen other MPs were locked down inside an Ottawa office where they were meeting before the shooting occurred.

He said they heard from police, security and the military who told them to lay low and keep the door locked. Eyking said he felt safe but concerned.

A military officer at the Halifax Armoury on Agricola Street told CBC News he was alerted to the situation in an email sent out to staff that advised members to be on alert and travel in twos.

Province House in Halifax also beefed-up security. Police swept the legislature and all staffed have been asked to make sure they are wearing their IDs.

Back in Ottawa, Sandra Bales, speaking from Amherst MP Scott Armstrong's office, said she was lying on the floor with her office door locked as per instructions she received from Parliament security. She said Armstrong was downstairs in a caucus meeting and couldn't be reached.

"There's no way to get a hold of him," said Bales.

Bales said she's the only one who works in the office and said she's fine.

"I just spoke with security. They just came by and did a round of the hall with their guns drawn and assured me to keep the doors locked and stay low," she said earlier on Wednesday.

"I heard lots of loud noise in the building, and lots of people screaming."

MP Rodger Cuzner said people were finding out details through news reports and he also spoke to the "very, very stressed" supervisor of the pages on Parliament Hill.

"She said ‘I had heard the shots and there was somebody shooting so I just ran and I ran,'" he said.

"She was pretty shaken."