Capt. Jenn Casey of the Canadian Forces Snowbirds was being remembered by friends and colleagues Monday, a day after she died when the Snowbirds jet she was in crashed and burst into flames in the front yard of a house in a Kamloops, B.C. 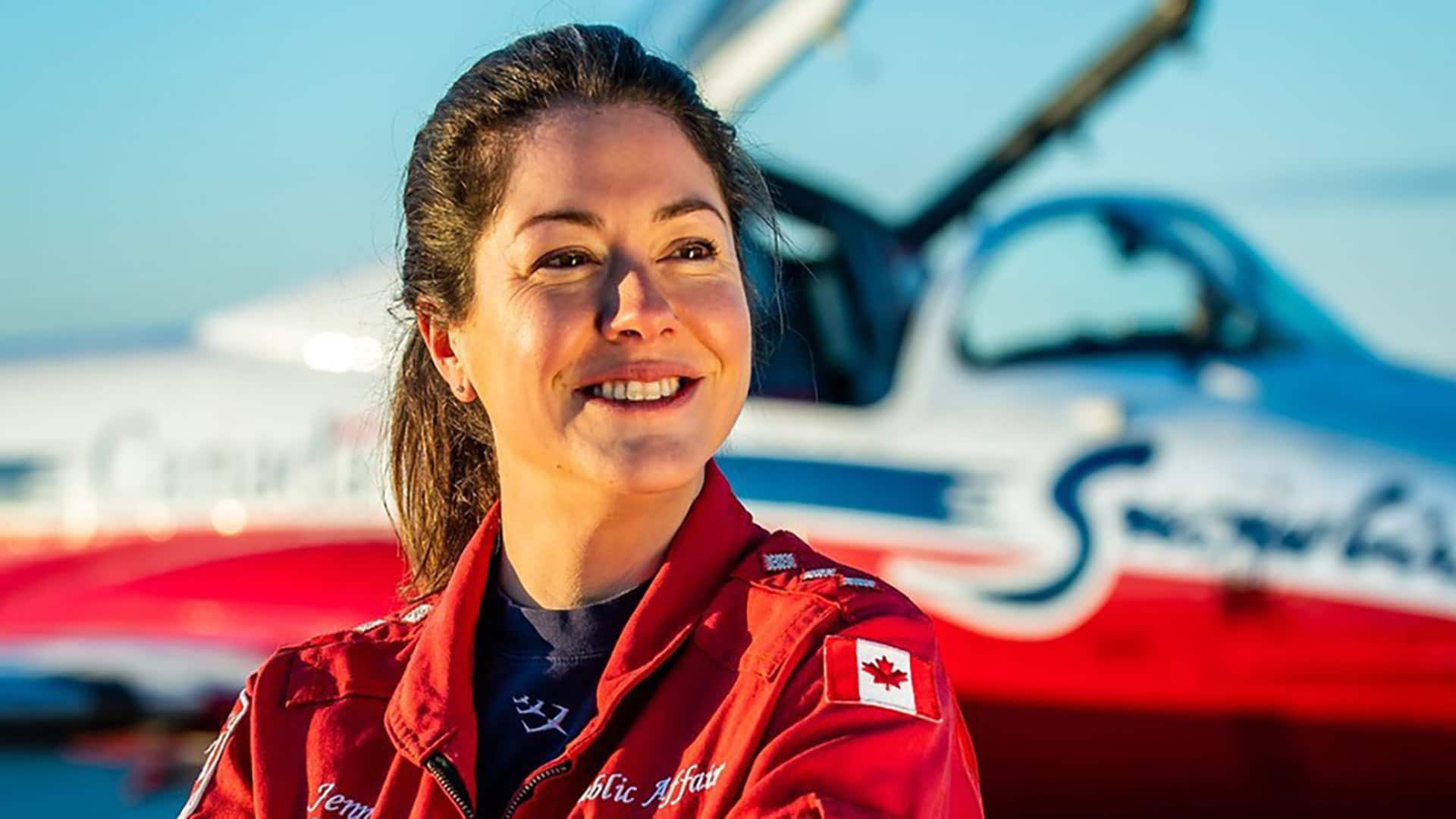 8 months agoVideo
2:04
A mass shooting that killed 22 people, a military helicopter crash from a ship based in Halifax, and now the death of Nova Scotia-born Canadian Snowbirds Capt. Jenn Casey — for Nova Scotians, 2020 is shaping up to be the year of tragedy. 2:04

Capt. Jenn Casey of Nova Scotia was being remembered Monday as a gifted storyteller, a kind and generous friend and a proud member of the Canadian Forces Snowbirds team.

Casey, a public affairs officer for the Snowbirds, died on Sunday when the jet she was in crashed shortly after takeoff and burst into flames in the front yard of a house in Kamloops, B.C.

The pilot, Capt. Richard MacDougall, was still listed in serious condition in hospital.

The Snowbirds have been on a cross-country tour to raise people's spirits during the COVID-19 pandemic.

"Nova Scotians stand with you and send our love, thoughts and prayers," he said via Twitter.

Doing 'exactly what she loved'

One of Casey's former colleagues from Halifax radio station News 95.7, Jordi Morgan, said just looking at a picture of Casey tells you so much about her.

"That really positive energy, that great smile that she had that would just absolutely light up a room," Morgan said Monday.

"She was somebody who was doing absolutely exactly what she loved doing, and she was doing it at a very high level."

Around 2010, Casey helped develop the Rick Howe show, now one of the flagship talk shows on News 95.7, and was the show's on-air producer for about two years.

Howe said she was a dedicated journalist, but he knew she had some other calling. He says he kept in touch with her after she left the show, and could tell she loved her time in the military.

Casey was on board one of the Snowbirds on May 3, the day they flew over Halifax, her hometown, and Howe said she would have been "in her glory," that day.

Morgan said Casey was warm and outgoing with a "terrific" sense of humour and didn't take herself too seriously, but was also very professional and great at her job.

Casey left behind very good friends in Halifax, Morgan said, but he's not surprised to see she connected with so many people across the country during her "dream job" with the Snowbirds.

Before he got a call from a mutual friend telling him about Casey's death, Morgan said his heart "sunk" when he heard the crash victim had been a woman.

"You kind of think, 'OK, that is probably going to be Jenn,' and it was just absolutely dreadful," he said.

Morgan said Casey is yet another "exemplary service woman" from Nova Scotia who has lost her life within recent weeks, referring to RCMP Const. Heidi Stevenson, one of 22 people killed in the mass shooting April 18 and 19, and naval officer Sub-Lt. Abbigail Cowbrough who died when a Cyclone helicopter crashed in international waters between Greece and Italy on April 29.

"I think people are crushed by it," Morgan said.

"I don't know how many more hits we can take here. It's been a dumpster fire of a year in Nova Scotia, obviously for a whole lot of reasons, and I just hope things turn around."

Casey, from Halifax, joined the Canadian Armed Forces (CAF) in 2014 after several years working as a journalist, according to her biography on the Royal Canadian Air Force website.

Her first assignment was at 8 Wing Trenton, in Ontario, the RCAF's home of air mobility.

Sean Costello, an Ottawa photojournalist who worked with Casey, said she was a bright person who had a smile that "would light not only the room that you were in but I'm sure two rooms over."

"It's a great loss. She was a wonderful person, very energetic … and I'm going to miss her," Costello said.

"The nation has been very well served by her."

He got to know Casey when she spent the 2018 season with the CF-18 Demo Team, travelling North America and the United Kingdom with the NORAD 60 jet.

Costello said that while Casey was busy and had a lot of details to keep track of in her job, she always took time to respond to people personally. She also had a great sense of humour and was "quick to laugh."

He said he can still remember her voice carrying over the crowd during shows with the CF-18 Demo Team, where she acted as narrator.

"She was just such a natural fit, with the positivity and the energy in her voice," Costello said. "It was just simply infectious. You couldn't have a bad day if you were listening to Jenn Casey."

'Determination' to finish what she started

Prior to joining the military, she worked in broadcast radio as a reporter, anchor and producer in both Halifax and Belleville, Ont.

She earned a bachelor of arts degree from Dalhousie University, a bachelor of journalism from the University of King's College and a masters of interdisciplinary studies from Royal Roads University in B.C., according to her RCAF biography.

Stephen Kimber, a journalism professor at King's, said Monday she was a "memorable" student in the program even before he taught her personally.

Casey completed her journalism degree in two parts, Kimber said. She took the first part of the one-year program in the fall of 2008 and left after that to get a job in the field.

She returned a couple years later to finish her courses, one of them taught by Kimber, and graduate while still working full-time.

"I think it was just part of who she was, her determination to do things, to finish things what she had started," Kimber said.

Over the years, Kimber said, he would catch up with Casey in her producer role whenever he would appear on Rick Howe's talk show on News 95.7, where he was a regular guest.

He said Casey was so enthusiastic when she told him she'd decided to enter the military that he couldn't help but be excited for her even though he'd hoped she would stay in journalism since she "had the smarts" to do it.

Kimber said he knows Nova Scotia's journalism community is a small one, and many members are trying to process Casey's death while reporting on it themselves.

It has to be "very, very hard" in the wake of other recent tragedies like the mass shooting and the Cyclone crash, he said.

He said he been following the social media posts and photos from friends and colleagues who knew Casey best.

"You just get the sense of how much she was loved, and clearly she was."

Casey joined the Snowbirds in November 2018.

The heads of all three universities where Casey attended tweeted their condolences on Sunday.

"With gratitude and admiration for her service, we mourn with her family, friends and colleagues," tweeted King's president Bill Lahey.

The RCAF has suffered another tragic loss of a dedicated member of the RCAF team. We are deeply saddened and grieve alongside Jenn’s family and friends. Our thoughts are also with the loved ones of Captain MacDougall. We hope for a swift recovery from his injuries. - Comd RCAF <a href="https://t.co/8U41bdVqcU">pic.twitter.com/8U41bdVqcU</a>

The mayor of Moose Jaw, Sask., where the Snowbirds' home base 15 Wing is located, said Monday he was "deeply saddened" to learn of Casey's death.

"The Canadian Forces Snowbirds are an integral part of our community, and we send our deepest condolences to the Casey family and to the entire Snowbirds team," Fraser Tolmie said in a news release.

At a news conference Sunday, Lt.-Col. Mike French, the commanding officer of the Snowbirds, said the jet took off at about 11:47 a.m. PT Saturday from the Kamloops Airport, and crashed into a nearby neighbourhood "shortly after takeoff."

Video of the event shows two jets taking off in unison and flying together briefly before one veers upward before going into a nosedive.

French said the pilot, MacDougall, and passenger, Casey, both ejected prior to the crash. MacDougall's injuries were not life-threatening, French said.

The CAF Flight Safety team planned to leave Ottawa Sunday night to begin its investigation into the circumstances of the crash, the CAF said.

French said the cause of the crash was unknown, and an investigation could take up to a year to complete.