Scott Jones says he was attacked for being gay

In one of his first interviews since the attack, Scott Jones says he thinks he was targeted because he is one of the few openly gay men in New Glasgow, N.S. 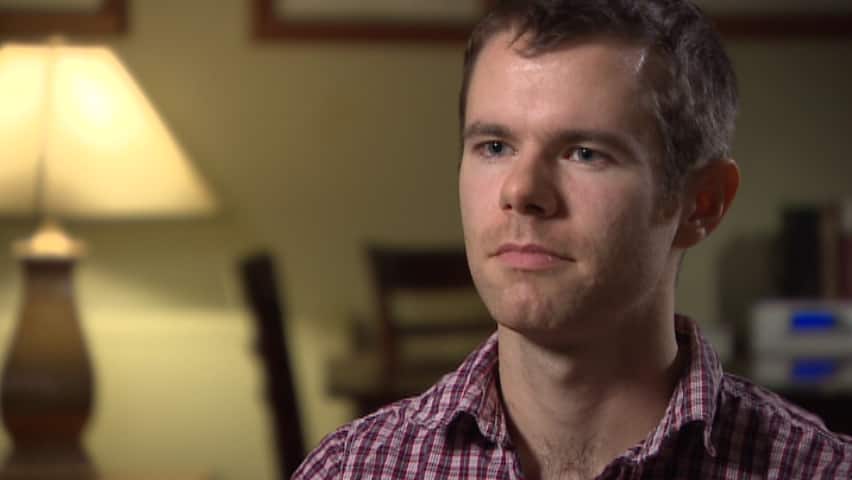 7 years agoVideo
1:53
Scott Jones speaks publicly for the first time about being stabbed outside a New Glasgow, N.S. bar two months ago. Shane Matheson has been charged with attempted murder but allegations have not been tested in court. 1:53

It was a look of judgment the man in the bar shot at him, one that Scott Jones says he has felt before as a gay man.

It's been two months since Jones was stabbed in the back and had his throat slashed after leaving that New Glasgow, N.S., bar on Oct. 12.

In his first interview speaking about the attack, Jones says he is convinced he was targeted because he is one of the only openly gay men in town.

"I believe it was because I was gay, I am gay," he told CBC News.

The attack made headlines across Canada, launched an outpouring of support for Jones, and prompted a campaign encouraging people to speak up against homophobia.

Jones is now paralyzed and uses a wheelchair. But he is thankful for the support, touched by the love he feels, and is especially appreciative of how the community has reacted.

Jones said he doesn’t know the man who attacked him. He only spotted him earlier in the evening at a pool table at the Acro Lounge.

"Our eyes met. It was a very distinct moment, a glare that I recognized from my life as a gay man," Jones said.

"I'm sure a lot of people in the queer community can identify with the look — just of judgment."

He tucked the moment away in his mind, he said, not thinking it was anything of substance.

Jones later left Acro with a friend. As they walked down the street, Jones said he heard shouts. He turned and spotted the man from the bar making a beeline toward him.

Jones said he's not sure it will be proven in court he was attacked for being gay. But there was a lot of anger, and there was a knife.

"Earlier at the bar it felt like judgment and anger, maybe," Jones said. "But later it was a clear direction that he was going in, and it was towards me. No one else. In hindsight that encounter at the bar means a lot to me."

Jones said he went into "survival mode." He was taken to Aberdeen Hospital in New Glasgow, and then flown to Halifax.

Police arrested Shane Matheson, 19, and he was charged with attempted murder, aggravated assault and possession of a weapon dangerous to the public peace.

Doctors initially said Jones' spine was severed and that he would never walk again. But now experts say there are still nerve fibres passing through.

"That means a significant amount of hope," Jones said. "Things are coming back and doctors are saying that there is a possibility of walking with assistive devices."

He continues with occupational and physiotherapy at a rehab centre. He's learning to use a wheelchair, get into the shower and to cook.

"It's weird. It's kind of like I'm a baby again with a fully conscious mind," Jones said. "That's tough at times, but it kind of forces me to be present. It tests my patience, for sure."

He remains optimistic and gets a steady stream of visitors, including his mother, sisters and friends.

Financial donations have flowed in to the tune of nearly $130,000. There have been fundraisers, including one called Gottingen Street for Scott Jones.

The attack sparked the Facebook-based Don't Be Afraid campaign. It features a series of photos of people holding up a colourful sign that reads: "Don't be afraid."

People have also sent along their own personal, positive messages.

"Everyone thinks it's 2013 and it shouldn't be happening," Jones said of homophobia. "When you go on Facebook and you see an article about what’s going on in Russia, usually the tag line is 'How's this happening, it's 2013.'

"But it's happening. It's like racism. It's always going to be there unless you talk about it, and there's education, and there's a non-judgmental discussion about the topic.

"If people don't talk about these things, then yeah, it will continue to happen everywhere."