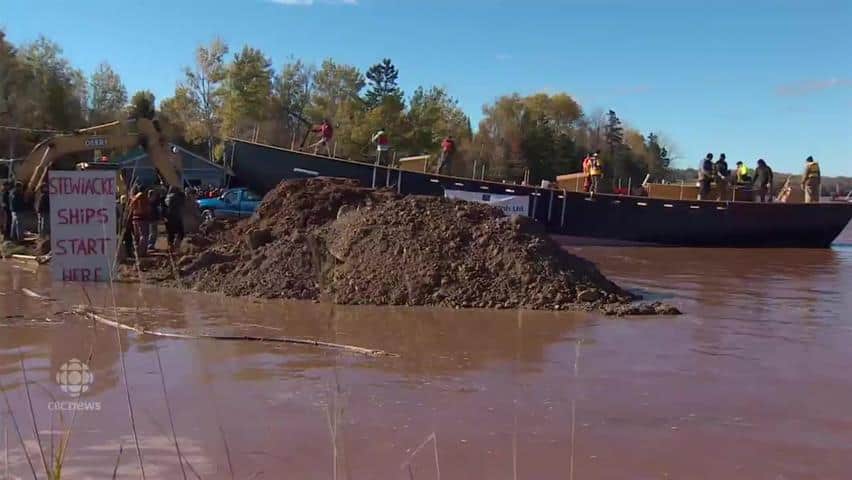 Evan and Nick Densmore's ship sat on the banks of the Stewiacke River waiting for the tide to rise. The Densmores had hoped the new moon tide would lift the boat safely over sandbars and shoals into the water — and it did.

The crowd gathered at the river bank cheered as the schooner gracefully slipped into the water just after 2:30 p.m. AT.

There was a chance the boat could become stuck in mud or not float at all, if the construction wasn't sound — but none of that happened.

"You got a half an hour window to launch, if you don't hit that you can wait until tomorrow and the next set of tides is next month. It's a do or die situation for sure," Evan Densmore said earlier on Tuesday.

After the launch, Evan Densmore's sister said her heart was pounding.

"Things went much quicker than I initially expected," said Joli Densmore. "We went in the wrong direction for a little while and that was hair-raising but we made it through and the boys are well and truly down the [Stewiacke] river now."

Densmore said while she was proud and excited, she is also a little worried.

"I've got lots of boys on that boat that are true and dear to my heart who have worked hard to be there, but they're still headed down that river without knowing what's ahead," she said.

The cousins were in their early 20s when they started work on the schooner.

"Five years building this boat, some days you get drug down a little bit," said Evan Densmore. "It definitely takes a bit of commitment to get where I am today."

The design is based on a 100-year-old fishing schooner used around Georges Bank off Nova Scotia.

It's made from a wood-epoxy composite with eastern spruce and local red oak, and weighs 65 tonnes.

"I really love building boats and I really love the enthusiasm, the excitement when people come down and seeing it. I'd definitely like to stay in the industry," said Evan Densmore.

Encouragement for other young people

Joli Densmore says the boat is a really big deal for Stewiacke and young people across the province who want to stay there.

"We haven't had a lot on the map lately and [for] two young guys from the area here to do something like this, I think it kind of speaks to a lot of people in the community — especially the younger crowd," she said, noting that some people even took their children out of school to witness the launch.

"I think it just shows the support that is in this community and lets people know it is there for anything they want to try."

The Katie Belle is en route to Parrsboro where masts will be installed.

In previous interviews, the cousins said they eventually want to sail tourists around the East Coast.