Salt trucks slow to get out, city admits

City officials admitted Thursday that the first snowstorm of the year caught them off guard and salt trucks were slow to get to many streets in the Halifax Regional Municipality. 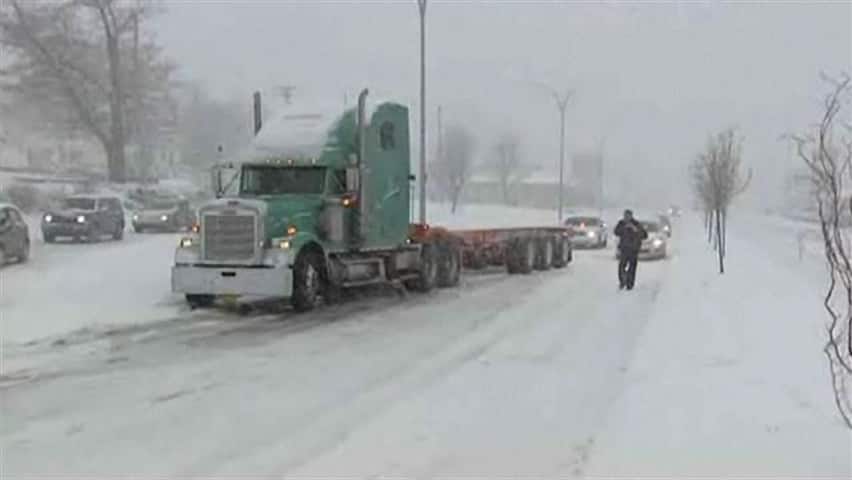 9 years agoVideo
2:09
The city of Halifax says the early arrival of the snowstorm caught them off guard. 2:09

City officials admitted Thursday that the first snowstorm of the year caught them off guard and salt trucks were slow to get to many streets in the Halifax Regional Municipality.

Gordon Hayward, the superintendent of Winter Works, said the municipality uses a private forecasting service to prepare for snowstorms and that forecast had his crew preparing for a storm at noon.

Nature delivered it at 8 a.m.

"Can we do better? Yes, for sure," Hayward told CBC News.

"We're not happy with our response yesterday morning. We want to be able to get out there and do a better job."

He said while the city had the salt and trucks ready, the earlier-than-forecast storm had crews scrambling to catch up to weather they should have been ahead of.

There were also glitches with new scales used to weigh each load of salt.

"On an individual basis, trucks were probably delayed 20 to 30 minutes, without question. Again, that goes back to having to react and having everybody there at the same time," said Hayward.

"Under controlled conditions, our own trucks are in and out and gone before you bring contractors in, and so you are doing it in a staged response and you don't have that congestion."

The late start and delays led to some treacherous roads. Halifax Regional Police said they received 66 reports of storm-related crashes.

Bill Urquhart, who works for Academy Towing, said he towed 47 cars and trucks on Wednesday. He said not all the blame should go to the slow start on salting.

YOUR VIEW: Your photos, videos and comments on the storm.

"There were multiple cars in ditches, accidents. A lot of it due to poor tires on vehicles," he said.

"I would say 70 per cent of them were either close to bald or summer tires."

Peter Dauphinee, who has been driving taxis in Halifax for 30 years, said he took his cab off the road during the snowstorm. He said drivers have to take some of the blame for the accidents.

"It was the first snowstorm of the year. It happens every year, it catches a lot of people off guard," Dauphinee said Thursday.

"Believe it or not, a lot of people still don't have their winter tires on and they get a false sense of security about the tires that they do have."