The union representing RCMP officers in Nova Scotia says members are facing burnout after a challenging year that has included grappling with the effects of the mass shooting in April that killed 22 people, including their colleague Const. Heidi Stevenson.

The union representing RCMP officers in Nova Scotia says its members are finding it challenging that the force has stopped releasing information about the April mass shooting, especially as they continue to struggle with the personal toll of responding to the killing of 22 people, including their colleague Const. Heidi Stevenson.

On April 18 and 19, a gunman travelled nearly 200 kilometres through rural communities shooting strangers, neighbours and acquaintances while masquerading as a Mountie.

Families of the victims are now suing the RCMP and have questioned whether the force did enough to stop the killer and warn of the danger. They've also been critical of the amount of information they've received about their loved ones' deaths. CBC News and other media organizations have gone to court to unseal search warrant documents in the case.

The last press conference about the attacks was June 4 and in recent months, the RCMP has repeatedly declined interviews about its investigation. In response to media requests, it has sent the same statement reiterating its commitment to accountability, transparency and participating in the public inquiry, which it describes as "the most appropriate and unbiased opportunity" to provide the facts about what happened.

"Our members want closure. Our members want ... to essentially be vindicated in their actions," said Sauvé, whose group represents approximately 1,060 RCMP officers stationed in Nova Scotia.

"For membership not to hear the RCMP support, that is challenging to them. And to wait for an inquiry to have their day and their say is difficult."

Members not allowed to speak with media

The mass casualty commission has started its work and a final report is expected in November 2022.

Meanwhile, the police investigation — which includes looking at where the shooter obtained his weapons and whether he had help — continues. Two weeks ago, the RCMP announced three people, including the gunman's spouse, her brother and brother-in-law, face a charge related to allegedly providing the gunman with ammunition. The Mounties have not answered questions or provided any information beyond a press release.

Individuals members of the RCMP are not permitted to speak to the media and could face disciplinary actions by doing so. Several officers declined to speak to CBC about their experiences in recent months, with some citing the possible repercussions.

Gilles Blinn, who retired from the RCMP in New Brunswick in 2018, said he's frequently in touch with former colleagues in Nova Scotia who are struggling with criticism of their actions during the mass shooting and who are frustrated that they can't defend themselves.

"They're far removed from all the decisions that are made at headquarters in Halifax and headquarters in Ottawa. They have no say in what's going on ... it's like they're gagged," Blinn said.

"They feel like they're not supported at the top. And any manager knows this, that if your people aren't happy under you, you have bad morale…. I think the morale is very low in Nova Scotia currently due to the fact that no one is speaking out on their behalf."

Blinn spent 31 years with the RCMP, including eight on the staff organization that preceded the union. For many years, the former staff sergeant originally from Digby County answered media calls. He'd like to see the RCMP provide more information that could clear up questions about how officers responded to one of the country's worst mass killings in modern history.

Blinn's son was one of the officers who responded in Portapique on April 18, though he stressed he couldn't speak to his son's experience and didn't know exactly what happened that night or the following morning.

But many of the people he knows are also grappling with the horror of what unfolded, Blinn said. Overall, he said Mounties don't feel supported by their leadership or the public.

"The effects don't happen right away, for some members it'll take years.... The trauma of seeing all this death and destruction and the agony of the victims' families, which is what never goes away. You know, seeing their loved ones pick up the pieces after someone's been killed. And trust me, I've been there many times, so you never forget it."

The RCMP offered employees the option of taking leave in the wake of the shootings. The force said some members took time off but would not disclose how many as it involves private health information.

Some employees are performing modified duties and others are on different types of leave, Cpl. Lisa Croteau said in an email. The RCMP employs about 1,450 people in the province, though not all are members of the union.

CBC has confirmed some officers remain off work, in part, because they're dealing with the psychological impact of responding.

Sauvé said across the board, members have been hurting alongside their communities in a year that has been particularly challenging for policing. He said COVID-19 has meant fewer officers are being trained to fill vacancies, recruitment remains low, and the union is starting collective bargaining after nearly four years without a raise.

On top of that, protests against policing and police brutality in the U.S. and Canada have prompted widespread criticism of the profession.

The fact that officers have taken time to deal with trauma is positive, the union president said, as it signals an understanding that it's OK to admit to needing help.

"We don't have to, you know, suck it up and soldier on any longer.... the RCMP, as well as Canadians, are starting to realize that trauma affects everybody differently and recovery from traumatic events can take longer for some than it can for others," said Sauvé.

"They had to respond to the incident. They've had to deal with the aftermath and the investigations of that incident, at the same time grieving the loss of one of their colleagues as well as some of their friends."

The union said close to 100 officers travelled to Nova Scotia to help investigate the shootings and backfill officers who took time off in the months since the tragedy.

But even still, he said the force is facing "big morale challenges" exacerbated by COVID-19 and staffing stretched to the limit. Sauvé said many officers have been denied vacation time due to operational requirements and have been working "day in and day out."

"I'm seeing burnout. I am worried about it," said Sauvé. 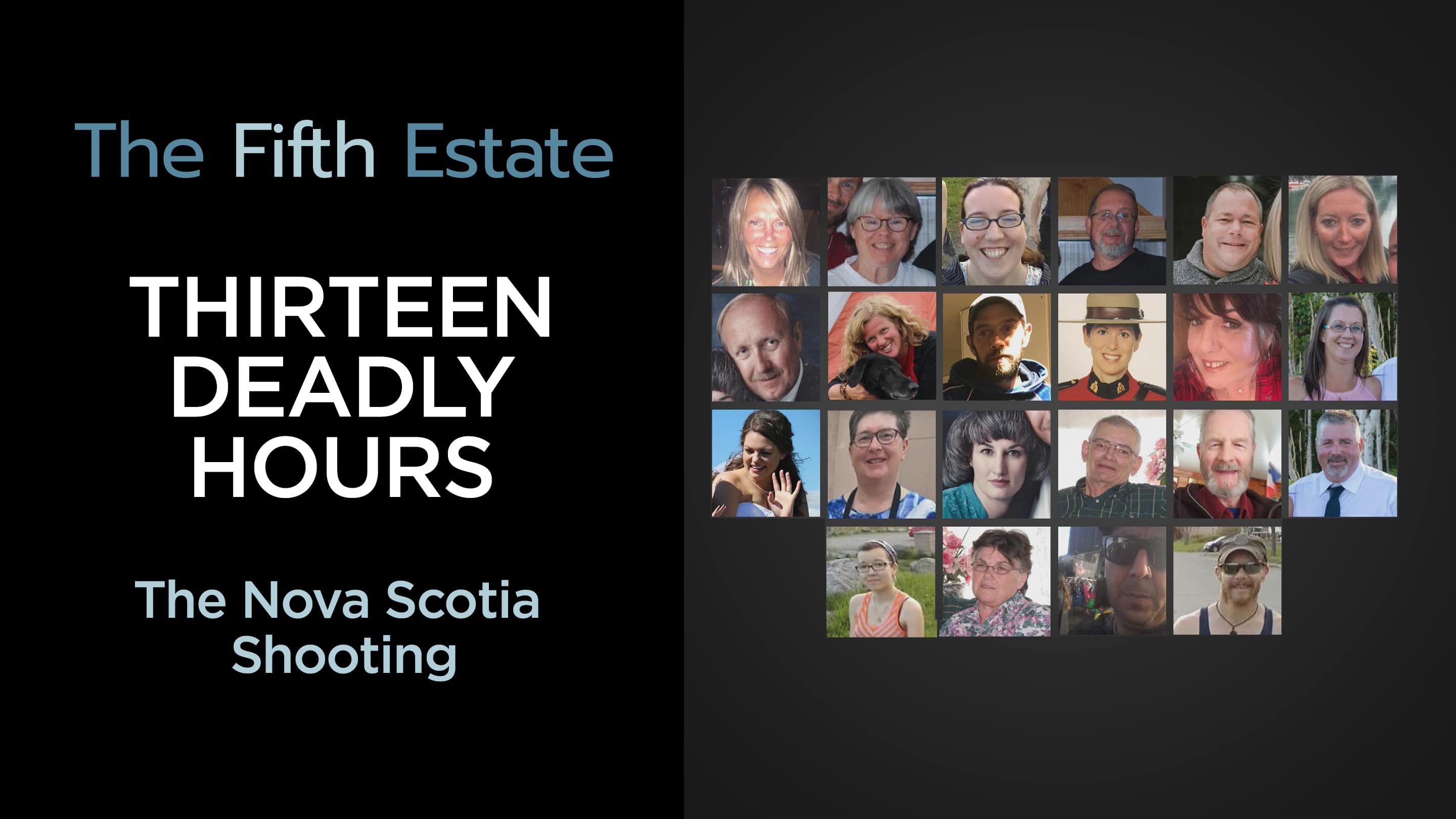 2 months agoVideo
45:10
The Fifth Estate presents a comprehensive inquiry into this year's mass shooting in Nova Scotia, chronicling 13 hours of mayhem that constitute one of Canada's deadliest events. 45:10