The Halifax Regional Municipality has set up bait traps around the downtown area to deal with its rat problem. 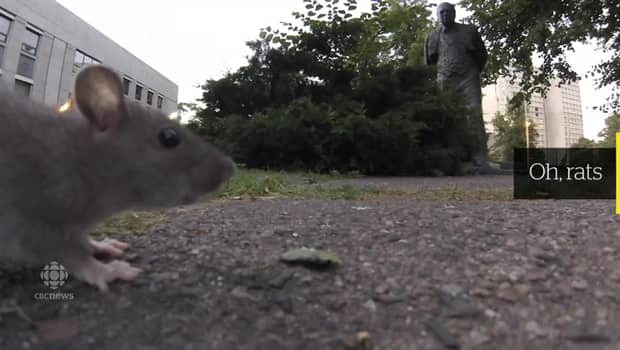 5 years ago
0:53
There are a few reasons you may see more rats scurrying around Halifax lately. 0:53

If you don't think Halifax has a problem with rats, take a walk through Grafton Park in front of the old library around dusk.

You'll find yourself tripping over them.

An unseasonably warm winter in Nova Scotia has allowed rat populations to survive and thrive.

Keith Gillis sat down for a hot dog this week near the Churchill statue and couldn't believe his eyes.

"This is daylight and the rats are actually coming out and eating with the pigeons," said Gillis. "It's disgusting. It's summer time, it's tourism season."

The park is a popular spot for food trucks and other food vendors. It's common for the lunch crowd to swat away pigeons and starlings as they try to eat their fries, but rats?

Jeff Merrill takes his toddler son out for walks through Grafton Park every day.

"It's not even that I'm so worried about them or whatever," said Merrill. "It's just that I know they carry diseases. And when I let him out of the stroller to play, who knows what he's touching or grabbing."

Gillis was so appalled by the sight of so many rats running around in broad daylight he called 311, the municipality's hotline for services and information.

"And they told me the city doesn't have a rat pest control program," Gillis said. "And I said, 'I don't care. This is a major business area and a major tourism area.'"

It turns out the municipality is at least trying to kill the rats.

"It's my understanding that our pest control service provider set up traps in and around the old Spring Garden Road library some time ago which are regularly serviced," said Tiffany Chase, senior communications advisor for Halifax.

Rats all the time

"Unfortunately the rodents may be more visible until these measures take effect," said Chase.

Food truck operators near the park say they're not surprised to see so many rats around this summer.

"Well it's a port city," said Jody Leblanc, of Bud the Spud. "It's next to an abandoned building. There are food trucks and lots of food vendors around the area within a few blocks so it's kind of a natural habitat for rats."

Tanner Morgan operates a food truck on Grafton Street and says the customers are often startled by the brazen rodents.

"I see their faces when they do see the rats and it's a little bit uneasy. It hasn't really breached our business per se and we kind of want to keep it that way," said Morgan.

Mason Teed, who works at a food truck near Grafton Park, sees rats every day.

"It's usually around here you see them scurrying around under the trees picking up food, mingling in with the pigeons and then they go back under. I'm here about five or six days a week and you'll see them on pretty much a daily basis," said Teed.

Even the security guards who patrol the abandoned library say the presence and movement of rats inside the library is setting off the security alarm. It's not uncommon, they say, for them to respond to an alarm only to find no one inside.

No one, that is, but the rats.

Preston Mulligan has been a reporter in the Maritimes for more than 20 years. Along with his reporting gig, he also hosts CBC Radio's Sunday phone-in show, Maritime Connection.