A New Glasgow family says they wouldn't be alive if it weren't for their eight-week-old puppy named Zeus. 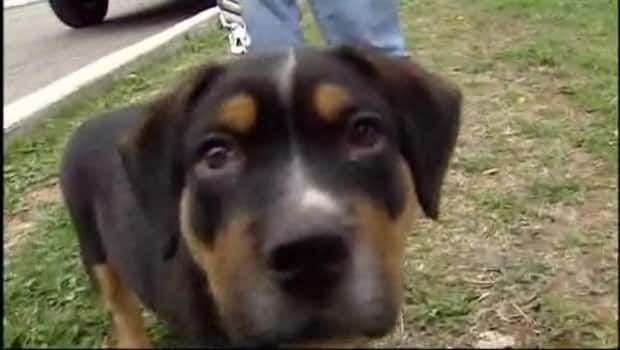 9 years agoVideo
1:49
Kevin Harvey tells the story of how a puppy saved a family from a burning home in New Glasgow, N.S. 1:49

A New Glasgow family says they wouldn't be alive if it weren't for their eight-week-old puppy named Zeus.

Kyle Christensen, his girlfriend and his baby were in bed when they heard Zeus barking around 3:30 Monday morning.

"I got mad at him at first, and I feel bad for it now," Christensen said, assuming that the dog just wanted to be let out. "I came down to see what was wrong with him when I got downstairs I could smell smoke, see smoke, and the dog was going crazy."

Christensen realized his home was on fire. He yelled to his girlfriend to get the baby and they bolted from the home.

"You could see the glow, the glow that really alerted me, I said ok there's a fire."

The family escaped the home unharmed, but there was significant damage to the house.

Christensen said the smoke detector didn't go off until they were out of the building.

"That big old beast saved my life, crazy to think it though," he laughed.

"The little dog obviously took over that role and they wouldn't have got out of that house, I don't think, in another few minutes," he said.

Christensen said Zeus will be rewarded with a juicy steak.