Spike in jail violence 'a problem right across the country'

The last decade has seen a steady surge in the number of inmate-on-inmate beatings in federal prisons and provincial jails.

It's 26 seconds of brutality — and lays bare the emerging reality of a growing number of beatings in Canada's jails.

Inmate Dwayne Wright, watching television with his feet up, is suddenly sucker-punched from behind by another inmate. A video of the attack shows him falling to the floor, his shoes flying off, as he tries to cover his face from a series of head shots.

His attacker, Charles Wallace, finishes with six soccer kicks to the 34-year-old Wright's head, and calmly resumes pacing and chatting with another inmate. 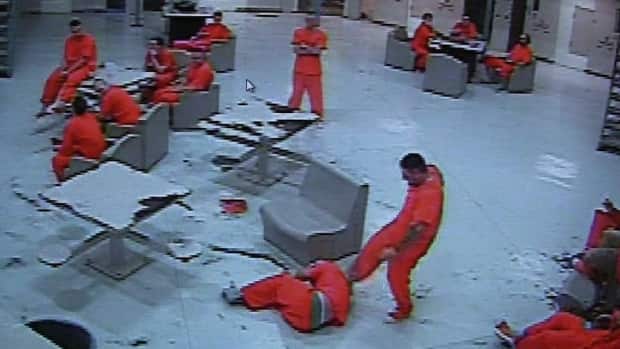 Some prison advocates and lawyers say such violence is the new normal: Prisons that installed video technology in hopes it would decrease violence find they now instead often serve to document a disturbing long-term rise in beatings that have caused fatalities, brain injuries and life-long trauma.

The last decade has seen a steady rise in prison beatings, with annual inmate-on-inmate assault in federal prisons growing 93 per cent to 581 in 2014-15, from 301 in 2006-07, according to Ivan Zinger, director of the federal correctional investigator's office, using Correctional Service Canada data.

"An environment where prisoners are at higher risk of being assaulted ... should not be part of the sentence," he says in an academic article published earlier this year that argues conditions in prisons have worsened over the past decade.

Provinces, which are responsible for prisoners sentenced to less than two years in jail, report similar sudden rises.

In British Columbia, the solicitor general's office says assaults and attempted assaults have risen to about 1,200 last year, from about 880 in 2011, up by about a third — with a spike in the first six months of this year.

"It is a reflection of higher inmate counts, the criminal histories of those in custody, and the growing number of inmates with addiction and mental health issues," writes spokeswoman Kate Trotter in an email.

In Ontario last year, there were 2,762 inmate-on-inmate assaults, up 13 per cent from the number of assaults a decade earlier — though the figures were even higher between 2011 and 2013.

In Nova Scotia, total inmate-on-inmate assaults were up from 196 two years ago to 287 so far this year, a 46 per cent increase.

The assaults range from severe beatings to spitting, with the majority being less severe forms of contact.

"This clearly is a problem right across the country," said John Peach, executive director of the John Howard Society of Nova Scotia. Prison, he says "was never intended to be an informal network to hand out its own punishment."

Tonia Grace, an Abbotsford lawyer who frequently represents inmates in British Columbia, says the potential cost to the governments for legal liability across Canada runs into "the millions" of dollars for the most serious cases, as courts have established prisons bear a responsibility for ensuring inmates' safety.

Grace currently has "at least 15 open files" of prison beatings where inmates are suing the province.

She is currently representing Daniel Cunningham, who alleges he was severely beaten for five hours last year by other inmates in the Surrey pre-trial jail in June after being transferred into an area that housed members of the Red Scorpion gang.

The lawsuit says the guards must have known what was going on as Cunningham screamed for help and others on the unit egged on his unidentified attackers. The province has denied that allegation and says in a statement of defence that Cunningham requested the transfer and voluntarily broke rules when he entered the gang members' cell.

Grace, who represents other clients who have facial fractures, broken bones, and have lost mobility in jail violence, says "the prison authorities have to take incompatibility more seriously."

In Ontario, former inmate Francis Jesse Deguire launched a lawsuit against the provincial government after he was beaten severely while serving a brief sentence for drunk driving in Brockville. He says an attack by other inmates last year nearly detached his eyelid and left him with bloody head injuries.

A judge who sentenced one of Deguire's attackers questioned whether it was time for an inquiry into provincial institutions.

"There have been complaints for years about the state of our institutions," said Justice Peter Wright. "This is far worse. It raises serious issues of safety, about the ability of correctional officers to respond, their authority, training, planning and supervision."

At the Halifax provincial jail where Wright was beaten, there have been 111 assaults in the first nine months of this year.

Wallace, convicted on Nov. 29 of the assault in Dartmouth provincial court, had been transferred into the jail's West 3 unit hours earlier, even though an online system showed he posed a danger to Wright as an "incompatible," and shouldn't have been near him on Nov. 9, 2015.

Wallace, 40, had been serving time for drug possession. Wright had been incarcerated for two months for theft and breaches of release conditions.

After the beating, Wright was eventually treated with eye packs and ibuprofen for the swelling and bruising on his face, and moved off the unit and released weeks after the incident.

The court heard testimony of how a computer system that was supposed to keep the men apart simply didn't "link," and made no warning of the danger Wallace posed.

Sean Kelly, the province's director of corrections, says until late last year the computer system had problems making two-way links between incompatible prisoners. He says it has been improved, but is still being worked on.

"We're looking at making further changes to make sure there's no problems in that area again," he said in an interview, adding that it's not uncommon for an inmate to have anywhere from six to 40 other inmates with whom they're considered incompatible.

Michael Weinrath, a criminologist and the author of Behind the Walls, read the testimony and viewed the video of Wright's beating, and said, "that's an obvious error. They need to correct that," of the computer glitch.

However, the teacher at the University of Winnipeg says the deeper worry is the frequency and intensity of violence among inmates.

"At the time I wrote my book, the trend to more violence was not evident; it has been in the last few years," he says.

In Behind the Walls, he suggests multiple causes, including the potency of the drugs being traded, the rise of gangs that target other inmates, and also a decline in a once prevalent code of behaviour that governed relationships between inmates.

In some of his interviews with inmates, Weinrath heard accounts of violations of the "convict code."

"Inmates stealing from one another, fights … problems on the street being brought into institutions, and no consistent status hierarchy by crime being recognized," were among the consistent breaches that seemed to have escalated, he wrote, basing his finds on dozens of interviews with guards and inmates.

Grace says many pre-trial detention centres don't have sufficient staffing levels and are overcrowded, adding to the danger to inmates who may not have even appeared in court.

Peach says governments mostly ignore the assault problem, and too many members of the public view it as an acceptable part of prison life — despite the cost to the taxpayers in lawsuits and long-term disabilities.

He watched the video of Wright's beating with horror.

"There's an obligation on the part of corrections to do everything in their power to try and prevent this kind of assault," he says.