Police in Nova Scotia are continuing a crackdown on highway stunting; stressing that besides thousands of dollars in fines and insurance costs the troubling trend is dangerous. 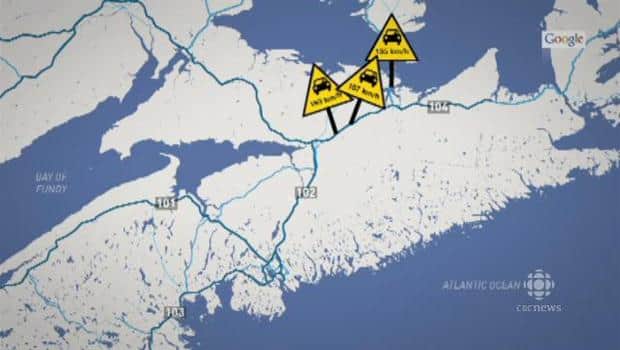 7 years ago
2:35
Stunting means driving more than 50 kilometres an hour over the posted speed limit. 2:35

Police in Nova Scotia are continuing a crackdown on highway stunting; stressing that besides thousands of dollars in fines and insurance costs the troubling trend is dangerous.

Going more than 50 kilometres over the speed limit in Nova Scotia qualifies as stunting and brings a fine of more than $2,400, six demerit points, a seven-day licence suspension and cars may be impounded. Combined with higher insurance costs, and police say joy rides aren't worth it.

A teenaged boy was clocked going 194 kilometres per hour in a 110 kilometre zone on the weekend.

"That car was driven by a 17 year old that had passengers from the ages of 14 to 17. Thank God that our officers were able to stop that vehicle and because certainly we could have been looking at a different picture today with some young people seriously injured or killed," said RCMP Insp. Ray Oliver, who heads traffic services in Nova Scotia.

"It's the behaviour that it's okay to speed, it's the thrill but they have to know that that behaviour can end in tragic circumstances."

In February, two men in separate vehicles were ticketed going 183 and 167 kilometres an hour near Mount Thom. Police said the cars carried 12 students.

Then in June a driver clocked 209 kilometers per hour in Chester Basin.

"There could be consequences," warned Halifax Const. Pierre Bourdages. "Financially and, hopefully not, even with their life."