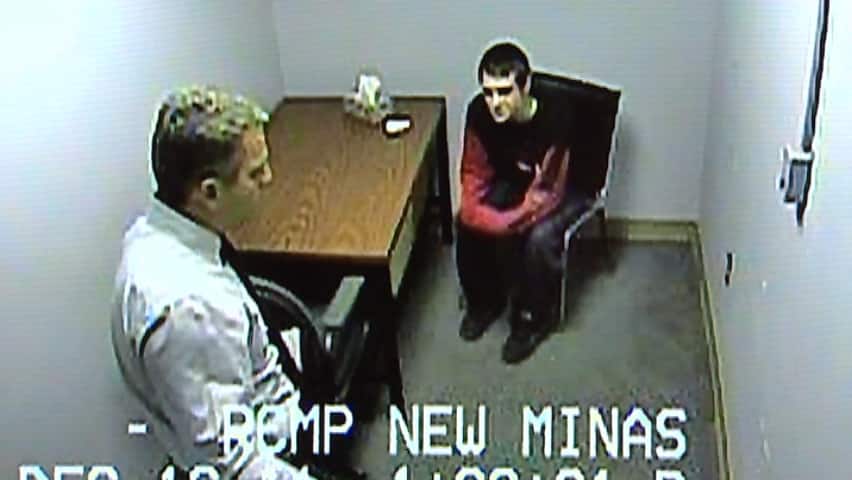 The 23-year-old Kings County man is charged with criminal negligence causing death and trafficking in a controlled substance in the death of Joshua Graves.

Graves, 21, died on March 19, 2011, after taking a lethal mix of alcohol and Dilaudid. He had attended a house party in the Annapolis Valley the night before.

Hours after Graves' death, police whisked Fredericks into an interrogation room. The videotaped statement recorded at that time was at the centre of Wednesday's court decision.

In the tape, Fredericks is seen weeping about Graves' death. He called him a good friend.

About two hours into the interrogation, RCMP Cpl. Scott MacMillan raises his voice.

"You're hurting people and you're hurting yourself. And you don't give a shit and that scares the f--- out of me," MacMillan is heard saying on the tape.

"He's sitting in a closed casket, he's sitting there waiting in a jesus suit that he probably didn't even want to be in," he continues.

"You know what? He's rotting. And you're letting him rot."

Fredericks later testified he lied to police because he was experiencing going through drug withdrawal and wanted the interview to end.

On Wednesday, Judge Allan Tufts ruled Fredericks was showing signs of drug withdrawal during the interrogation. Tufts also said the investigator's repeated insistence that Fredericks wasn't going to be charged with manslaughter amounted to an inducement to admit involvement.

The judge said the fact that the officer yelled at Fredericks, called him names and compared him to the devil was degrading to the accused and overpowered his free will.

Those factors raised a reasonable doubt the statement was voluntary, said Tufts.

The defence said it won't be calling any further evidence.

"I didn't know how he could be found innocent if he himself said he was guilty. So now we have to rely on everybody else's testimony who went to the party that night."

Tufts will deliver a verdict on Feb. 21.

Earlier this month, the defence argued the interview should be excluded because of aggressive police interrogation techniques.

The prosecution said those techniques fall within accepted police practice.

Fredericks is being held at the Central Nova Scotia Correctional Facility in Burnside after breaching bail conditions and running from police.

He was charged after Amy Graves mounted a public campaign urging police to reopen the investigation into her brother's death.