The hidden horror of police domestic violence in Nova Scotia

In the last eight years, 14 Nova Scotia police officers have been charged with domestic violence offences. Experts say that's likely a fraction of what is actually happening. 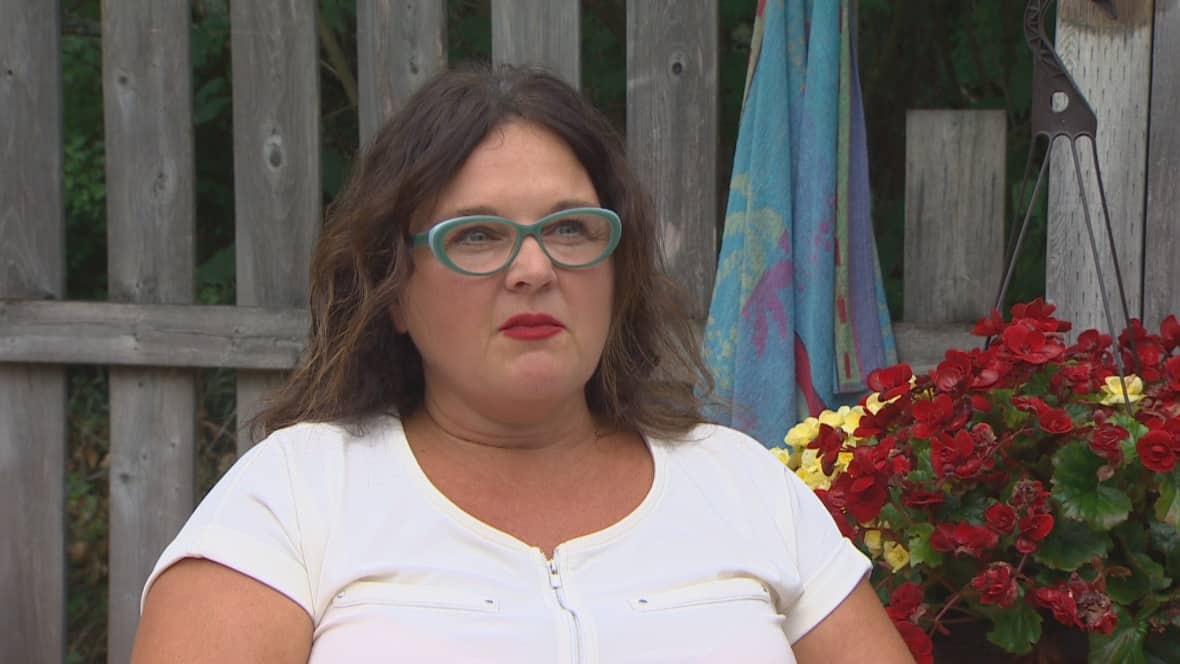 N.S. woman opens up about domestic violence at hands of police officer

3 months agoVideo
2:25
In the last eight years, 14 Nova Scotia police officers have been charged with domestic violence offences. Experts say that's likely a fraction of what is actually happening. The CBC's David Burke has this story. 2:25

For Ellen Doyle, the abuse started when she accidentally stepped on her boyfriend's dog. He forced her arms behind her back, grabbed the back of her neck and pushed her out of his house.

Things only escalated from there. She said he slapped her in the face in New Brunswick and on a trip to Cuba, she said he smashed her head into the ceramic tiles of their hotel room floor so hard she blacked out.

This was the final straw for Doyle.

"I had enough. I was steadily walking on eggshells and I knew if I didn't do this, he would constantly be tormenting me, he'd never leave me alone," she said. "What is going to happen next time? Is he actually going to go through with it and kill me, because he almost succeeded."

Her boyfriend at the time was Halifax Regional Police officer Jason Richard Murray. Doyle's allegations about the incidents in New Brunswick and Cuba have not been proven in court, although Murray pleaded guilty to assaulting her when he threw her out of his house.

Doyle is not alone. In Nova Scotia and across the country, some intimate partners of police officers are being abused, and many are afraid to come forward because they have to report that abuse to officers who work with their partner, experts say.

Since 2012, 14 police officers from across the province have been charged with crimes connected to domestic violence, usually assault, according to documents from Nova Scotia's police watchdog, the Serious Incident Response Team (SIRT).

By police force, the number of officers charged is:

CBC News examined nine of those cases. In four cases, officers were either found not guilty or had their cases dismissed. In the other five, officers were found guilty or pleaded guilty and were given a conditional discharge or an absolute discharge and had to serve probation.

The number of officers charged seems low to Kaitlin Geiger-Bardswich, a manager with Women's Shelters Canada, an advocacy group for women who have experienced violence.

She said there are 60,000 women and children who stay in shelters every year, yet most incidents of domestic violence are never reported. Geiger-Bardswich believes that people in abusive relationships with police officers are even less likely to report it.

"In general, women are afraid of not being believed and not having their cases taken seriously and that's taken to a whole other level when the abuser is part of the system a victim is supposed to be reporting to," said Geiger-Bardswich.

Research done in the United States suggests that officers are actually more likely to abuse their domestic partners than the general public, said Nicholas Bala, a professor of family law at Queen's University in Kingston, Ont. He said there hasn't been enough research done in Canada to determine if that's the case here.

"If the victim does call the police, it may be the colleagues of the offender who are coming to investigate and they may be discouraging or undermining an effective investigational response," he said.

That shouldn't happen in Nova Scotia because it is the only province in Canada whose police watchdog organization investigates allegations of domestic violence involving police. SIRT is an independent organization that doesn't answer to any of the province's police forces.

It's only through SIRT's work and that of the courts that the public gets a glimpse of the violence some officers commit against their loved ones.

One such act of violence occurred on June 16, 2015. Halifax Regional Police Const. Tyler Andrew Anstey and his ex-wife, who is also a Halifax police officer, were in the process of getting a divorce when they got into a heated argument on her doorstep, according to provincial court documents.

Anstey became angry and went to go into his ex-wife's home, who was pregnant at the time. She told him she didn't want him coming inside. She began to close the door and Anstey pushed her down. She fell and landed on the stairs banging her head.

"After he pushed me, I was scared for what was going to happen next, I had no idea if he had his firearm with him, or if he'd use it. What was next for me? What is happening to my unborn baby?" said Anstey's ex-wife in her victim impact statement.

She got up off the stairs and called the police.

"I was hired as a police officer, and took an oath to serve and protect the people of this city. Never in my wildest dreams would I ever have imagined that I would be calling for help from the people I work with," she said in her victim impact statement.

Neither she or her baby suffered any permanent physical damage. But she said regaining her confidence since the incident was a constant struggle.

Anstey pleaded guilty to assaulting her in 2016. He's still on the Halifax police force.

Like Anstey's ex-wife, it took Ellen Doyle a long time to regain her peace of mind.

"I didn't move outside of the house for almost a year, like just to go to work, I wouldn't do any social activities, because I didn't want him to find me. I wouldn't even put my address on anything," she said.

In 2019, Murray was found guilty of assault and assault with a weapon after he had a dispute with a man in his neighbourhood. Murray no longer works for Halifax police, but the force wouldn't say under what circumstances he left.

Bala said many police forces don't want to talk about domestic violence in their ranks.

Instead, the force sent an emailed statement saying that one case of domestic violence is too many and every complaint or concern that comes forward is investigated thoroughly by SIRT and the department itself. Officers are also encouraged to use the department's in-house supports, including counselling and peer support.

"Police officers are consistently reminded of the standards of conduct expected of them, and such behaviour is unacceptable and comes with consequences," said the email.

Nova Scotia RCMP also have similar supports in place for officers and their families.

If an RCMP officer commits domestic violence, there is a range of punishments the department can pursue, from docking pay right up to firing the officer, said Supt. Robert Doyle, the administration and personnel officer for Nova Scotia RCMP.

"Any misconduct by our members is certainly taken very seriously by the RCMP," he said. "I wouldn't necessarily say that there's an increase in domestic violence, it's just that we're seeing more reported."

"In situations where charges are warranted, we will prosecute [regardless] of whether it's another member of the public or one of our own members," said Robert Doyle.

He said the vast majority of RCMP members are law abiding and do fantastic work across the province and country.

Bala believes that some officers have aggressive personalities that lead to violent outbursts at home, while the stress from work could cause other officers to become violent. He said governments and police departments need to look at this problem and change their policies, training and how they screen potential officers.

Ellen Doyle thinks more training could be a solution as well. She would like to see officers trained to be compassionate and caring, and she has a message for anyone currently in a relationship with an abusive police officer.