Documents obtained by CBC News show the curiosity and confusion shared by Canadian military officials after the 2016 launch of Pokemon Go, which was sending civilians onto Department of Defence property searching for "mythical digital creatures."

'We should almost hire a 12-year-old to help us out with this,' an investigator wrote 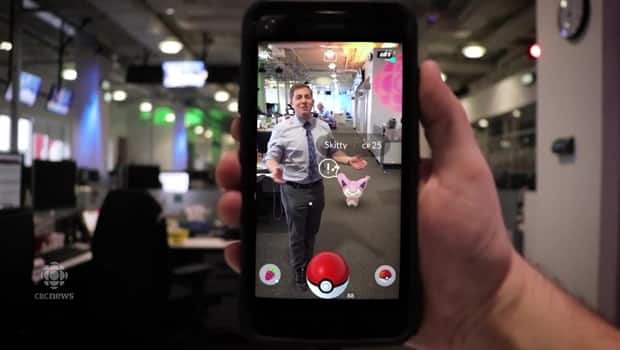 1 year agoVideo
1:35
The augmented reality game was designed in part to let its users explore the real world. But the pursuit of Pikachu has taken players onto federal property. 1:35

Just before midnight on July 10, 2016, Master Cpl. Daniel Boyd of the Canadian military police spotted something suspicious. He was on duty at Canadian Forces Base North Bay, about 350 kilometres north of Toronto.

In the darkness, two men in a van driving near the edge of the base made a U-turn and headed deeper into the military facility.

Boyd followed. The van stopped. Inside, the men were looking at their smartphones. Boyd walked to the driver's window.

It turned out they were playing Pokemon Go, and their pursuit of Pikachu led them onto the air force base.

Documents obtained by CBC News show the curiosity and confusion shared by Canadian military officials after the 2016 launch of Pokemon Go, which was sending civilians onto Department of Defence property searching for "mythical digital creatures."

Pokemon Go was a mobile app that launched in Canada on July 17, 2016, but it was launched July 7 in the United States and was downloadable globally by users who knew how to fool their phone into thinking it was in the U.S.

The app encouraged users to explore their communities, viewing the world through their phone's screen. Virtual creatures and items appeared in real-life locations.

Some locations were military bases. Within days of the app's launch, the Canadian Armed Forces had to issue a public warning: Pokemon Go users should keep off military property.

CBC News filed an access to information request after the warning was issued. Now, nearly 3½ years later, the Department of National Defence has disclosed 471 pages of internal files on the subject.

Most of the emails expressed curiosity and confusion about the new game.

"Plse advise the Commissionaires that apparently Fort Frontenac is both a PokeGym and a PokeStop. I will be completely honest in that I have not idea what that is," wrote Maj. Jeff Monaghan at CFB Kingston.

"The game's premise seems to be going to the 'PokeStops/Gyms' to collect 'Pokemon's' (we should almost hire a 12-year-old to help us out with this) of which we were able to find 5 of these things on the range road itself," wrote security expert David Levenick at CFB Borden, Ont., 100 kilometres northwest of Toronto.

"There's a game out there taking off like gangbusters, and it requires people to move to digitally cached locations to get points, etc.," wrote Lieut. Col. Richard Raymond at CFB Petawawa, west of Ottawa.

The notice was sent to all military police officers. It said: "It has been discovered that several locations within DND/CAF establishments are host to game landmarks (PokeStops and Gyms) and its mythical digital creatures (Pokemon)."

10 days after launch: kids on tanks

In the weeks after the app's launch, military police across the country suddenly saw a spike in suspicious activity.

"One lady at the Worthington Tank Park was playing the game whilst the 3 children with her were climbing all over the tanks," wrote Levenick at CFB Borden.

At CFB Greenwood in Nova Scotia, documents show a report of a vehicle "acting suspiciously in the Canex [store] parking lot." When police investigated, they found the occupants were playing the game.

When a man was stopped on CFB Borden, documents show he was playing Pokemon Go and told officers "I have to beat my kids [get more points]."

At least three military police officers (at CFB Comox in British Columbia, CFB Petawawa and CFB Kingston) were assigned an unusual task: wander around their bases, smartphones and notepads in hand, searching for virtual Pokemon infrastructure.

The documents show a wide variety of responses to the discovery of PokeStops and gyms on military bases.

At CFB Petawawa, one location where Pokemon Go players retrieved virtual items was at the Garrison Museum.

Officials at CFB North Bay were less enthusiastic. On July 21, 2016, they filed a complaint with Niantic, the developer of Pokemon Go.

"With the implementation of this PokeStop, there will be an increase in traffic onto the base, which could have a negative impact on 22 Wing's Mission," the request said.

Niantic responded that it would review the complaint and follow up.

Meanwhile, at CFB Halifax, officials tried to harness the game for their benefit. An email to Rear Admiral John Newton made a series of recommendations:

Rear Admiral Newton addressed the Pokemon generally in an email, writing: "Life and work are best accomplished if there is good fun, health and friendship.

"If Pokemon Go enables these values, while we protect our interests, then we all stand to marvel at this intersection of technology, gaming and health."

What took so long?

It took more than three years for the Department of National Defence (DND) to provide the documents requested by CBC News.

According to legislation, the normal response time should be up to 60 days.

"While our goal is to provide responses to Access to Information (ATI) requests as efficiently as possible, the review process is challenged by the size and complexity of the organization, as well as the number of requests received every year," said a statement from Jessica Lamirande, a senior communications adviser with DND.

"Recognizing that backlog files require more attention, DND recently created a new team in the Access to Information and Privacy (ATIP) Directorate as part of a Backlog Reduction Initiative. This team has been assigned the task of working solely on backlog files so that the other processing teams can concentrate on ensuring newer files do not go late," she said.

In other words, the orders given to government staff hired to identify overdue information requests seem to be, as Pokemon says, "you gotta catch 'em all."

Brett Ruskin is a reporter and videojournalist covering everything from local breaking news to national issues. He's based in Halifax.