A pair of entrepreneurs with boat-building backgrounds have constructed a home in Nova Scotia using thousands of melted recycled plastic bottles.

Bottles are shredded, melted, formed into slabs and made into walls for the house.

Joel German says when he and David Saulnier told people their plan to build homes with plastic bottles, "they looked at us like we were crazy."

Most houses use wood, nails, shingles and insulation — but not theirs.

This week, the team from JD Composites unveiled its first home in Meteghan River on Nova Scotia's southwest shore. It has walls made with 15-centimetre thick plastic slabs. More than 600,000 recycled plastic bottles were shredded, melted and formed into custom moulds for the walls.

Take a tour of the interior of the house 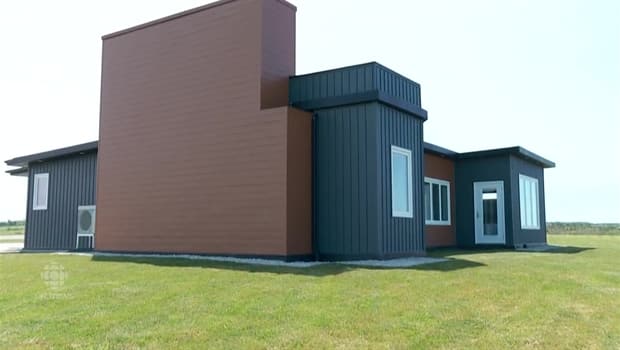 Take a tour inside a house made with plastic bottles

The build also came together very quickly. The walls went up in seven hours.

The walls provide both structural strength and insulation. It helps the home maintain inside temperatures more than twice as effectively as conventionally built homes, the builders say.

The home's plastic panels were also tested against winds stronger than a Category 5 hurricane. JD Composites says the testing machine maxed out its power and the walls didn't break.

With all of these features, the home still costs about the same as normal construction, the builders said. They didn't specify the exact cost, but said the final cost was less than $400,000, including all furnishings.

The founders of JD Composites have their roots in the boat-building industry and have used many of the techniques and materials in this new home.

"It's a bit of an outside approach. Taking from one industry and transferring it over to another. Thinking a bit outside the box, and making it work," said Joel German.

They plan on listing the house for sale. If it doesn't sell, they will put it on AirBNB to offer people the chance to rent the one-of-a-kind home.

"We hope it's the future," Saulnier said.

Brett Ruskin is a reporter and videojournalist covering everything from local breaking news to national issues. He's based in Halifax.