The leader of Nova Scotia's Progressive Conservative party sparred Thursday with the chair of the Nova Scotia Utility and Review Board in a dispute over negotiations to reach new power rates in the province.

Baillie says rates are being set behind "closed doors" 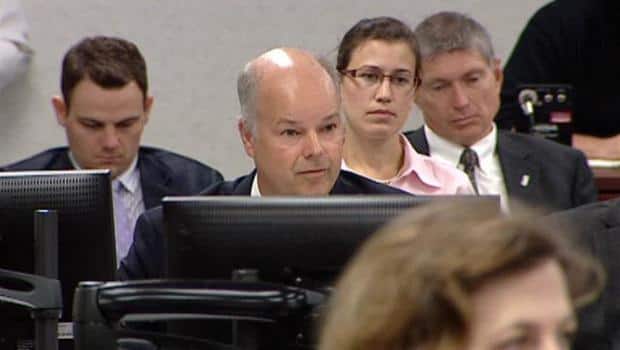 The leader of Nova Scotia's Progressive Conservative Party sparred Thursday with the chair of the Nova Scotia Utility and Review Board in a dispute over negotiations to reach new power rates in the province.

The issue is whether deal making behind closed doors is a reasonable way to shorten the regulatory process or an instance of unacceptable secrecy.

"Public tolerance for that way of setting our power rates is gone," Jamie Baillie told a packed hearing room in Halifax.

Public hearings into electricity rates were supposed to open Thursday morning before the Nova Scotia Utility and Review board, but they've been delayed for 24 hours.

Nova Scotia Power wants to raise rates by six per cent over the next two years.

As hearings opened the utility and lawyers representing residential and business customers asked for a 24-hour adjournment so settlement negotiations underway over the past several days could continue.

Baillie warned board members Nova Scotians will not accept a rate that is the result of secret negotiations.

"The entire process of setting electricity rates in our province is now officially broken," Baillie said.

"To put your board in a position to have to examine an agreement reached behind closed doors is the old way of doing things … it is no longer an acceptable way of setting power rates."

"This is a normal part of the litigation process. It's something the board supports."

Baillie was alone in challenging the settlement discussions.

Gurnham said in the four months since Nova Scotia Power applied for its rate increase the company has answered upwards of 800 written questions — all of which have been posted online.

"I realize it doesn't create the theatre that people often want to have," Gurnham said.

He said the public is protected. Any settlement will be fully examined by the board, its experts and interveners.

"You can ask whatever you want about it. You can ask about matters that are not in the agreement, there will be a hearing," Gurnham said.

Nova Scotia Liberal party leader Stephen McNeil also appeared at the hearing, but did not challenge the adjournment.

"I'm still asking questions. My right has not been denied. Nor has the right of Nova Scotian's been denied. This of Mr. Baillie was more about political theatre than about really trying to protect Nova Scotians," McNeil said.

"The process is not broken if anything its getting healthier with more inclusion, more discussion," Merrick said.

Settlement discussions are being expanded to involve more groups who are appearing at the hearing.