Eldon George is being honoured this weekend for his extraordinary work collecting world-class fossils and minerals in Parrsboro, N.S. 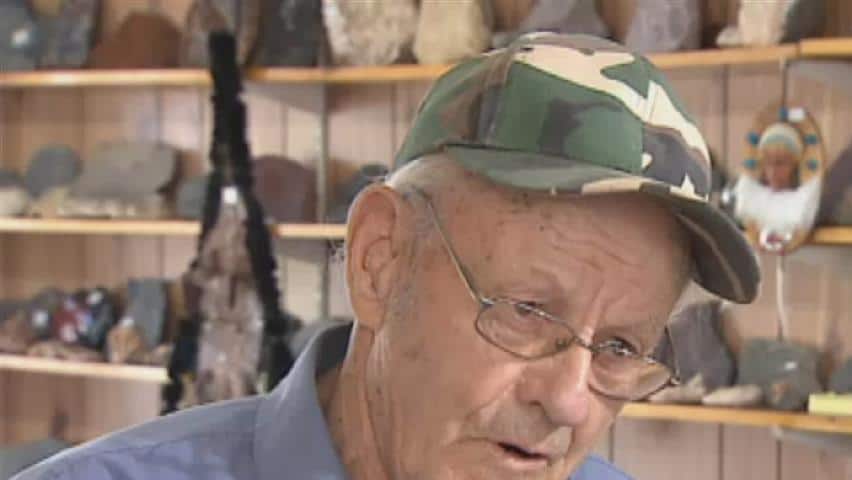 7 years ago
1:56
Eldon George's passion for fossils is officially recognized. 1:56

Eldon George is being honoured this weekend for his extraordinary work collecting world-class fossils and minerals in Parrsboro, N.S.

George, along with fellow amateur paleontologist Don Reid of Joggins, is receiving the Laing Ferguson Distinguished Service Award from the Atlantic Geoscience Society.

"It means a lot. It means one person can go out and accomplish a lot if he puts his mind to it. And I put my mind to it every day," he told CBC News.

George runs the Parrsboro Rock and Mineral Shop and Museum in Nova Scotia. It's a labour of love for a man who got hooked collecting fossils when he was eight years old.

"I had fallen, a real bad fall, about 25 feet. Broke my arm in three places and was in the hospital six months. Then I realized I couldn't go out and play hockey and ball like the other kids did," he said.

George unearthed his first fossil in 1949. His collection grew and he turned the house where he was born into a small museum.

"I went out every day I could get fit weather to go and walked these beaches and picked up fossils," he said.

In 1984, he found the world's smallest dinosaur footprint. It won him global fame, but he remains modest.

"I don't have any degree of any kind. I'm a rank amateur," he said.

It's not known what will happen to George's fossils in the future. Legally, they must stay in Nova Scotia. However, the minerals could end up anywhere.

The Gesner Institute Society, which George helped found, is trying to raise enough money to buy and display the collection permanently.

"Well, I'm hoping they can raise enough money to buy the collection and keep it in Parrsboro because that's where it belongs — not in Halifax, not in Ottawa," George said.

"It belongs in Parrsboro."