People who live in Parkers Cove are coping with the loss of the only year-round industry in their community. 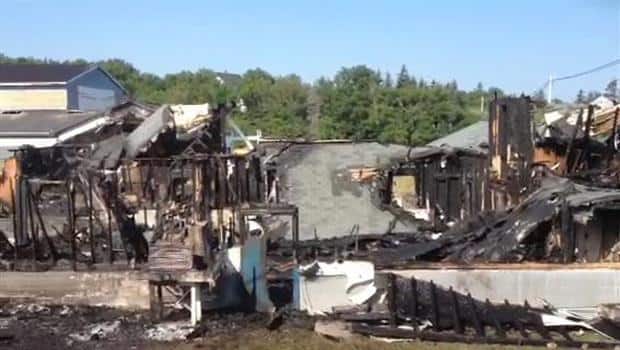 People who live in Parkers Cove, N.S. are coping with the loss of the only year-round industry in their community.

The local fish plant burned to the ground Monday night.

In the end, it wasn’t enough.

"I drive by and I can see that there’s a couple of fire trucks there and I can see the smoke is coming up from the ice room where they make ice and now I can see it’s really billowing. Then I have a bird’s eye view -- I have a loft in my house -- and I just watched it basically burn down," said Melanie Robinson who lives nearby.

She said she’s just thankful that no one was hurt.

Robinson’s father built the plant. Her brother owned it before selling it to its current owner.

"A part of history in our little community was going up in smoke. I know there's a lot of university students that work there, they're out of a job. And there's other local men in their 40s to 50s that work there and there's no work for them. Now it's just basically a burnt crust shell that's left," she said.

The plant employed about 30 people.

Robinson said she believes the plant was fully stocked with lobster when it burned.

There is no word on the cause of the fire, but investigators say they don’t think it’s suspicious.