A Nova Scotia's environmental group says it's outraged the province has weakened forest protection requirements for the new owners of the Port Hawkesbury Paper mill in Cape Breton. 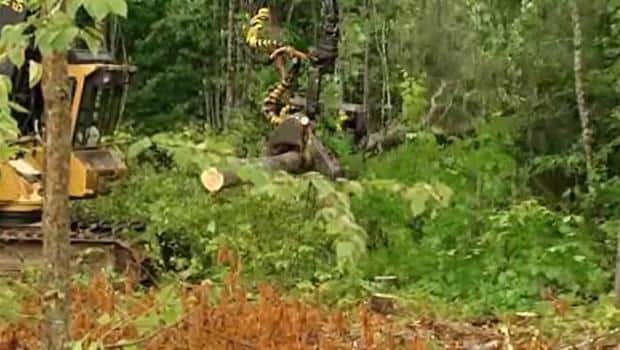 8 years agoVideo
2:08
The deal between the province and the Port Hawkesbury Mill is concerning environmentalists. 2:08

A Nova Scotia's environmental group says it's outraged the province has weakened forest protection requirements for the new owners of the Port Hawkesbury Paper mill in Cape Breton.

The Ecology Action Centre says the final agreement signed Friday between the province and Stern Partners Inc. — an affiliate of Pacific West Commercial Corp. — includes a clause that would allow the newly reopened mill to drop its certification by the Forest Stewardship Council.

The mill's previous owners, including Stora Enso and NewPage, cut wood using sustainable practices approved by the Forest Stewardship Council — an independent, non-governmental organization that tells consumers when a company's forestry practices are well-managed and sustainable.

But the final agreement with Stern Partners Inc. includes a clause allowing the mill to drop that practice: "Port Hawkesbury Paper shall maintain its Forest Stewardship Council certification, or such alternative certification as may be mutually agreed upon."

"It really means that they're supposed to perform at a higher level based on this certification," said Raymond Plourde, the wilderness co-ordinator with the Ecology Action Centre.

"But, if they find it problematic or too expensive or whatever reason, they can then go to the government and say, 'We want to go with something less.'"

In addition, Plourde said the agreement could allow the company to log nearly 90,000 hectares of Crown land that was supposed to be protected under agreements signed by the mill's previous owners.

The agreement opens the door to Stern Partners Inc. acquiring and logging some of that Crown land by January 2015 if the province decides not to protect it.

"Having gotten our potential protected areas into their licence at the very last minute — against what the government has promised and assured the people of this province — means that they really are starting off on a bad foot," said Plourde.

260 employees hired back at restarted mill

Natural Resources Minister Charlie Parker confirmed Port Hawkesbury Paper can chose another certification process, but said the province would have the final say.

As for protected lands, Parker said that part of the agreement was the same for the previous owners — that no later than Dec. 31, 2014, some of the protected land could be handed to the mill for logging if the province already has enough land to meet its legislated commitment to protect 12 per cent of Nova Scotia's land mass.

NewPage Corp. shut down the mill in September 2011, throwing 600 employees out of work.

After almost a year of negotiations, Pacific West Commercial Corp. agreed to buy the mill for $33 million last Friday.

Under a deal struck last month, the Nova Scotia government is providing a $124.5-million aid package on top of the $36.8 million it has spent keeping the mill in a so-called hot idle state.