Signs displayed in Little Harbour, N.S., show not everyone is opposed to the sale of Crown land for a proposed golf course development.

'Our communities are small and we don't have a whole lot going on down here,' says Margaret Stevens 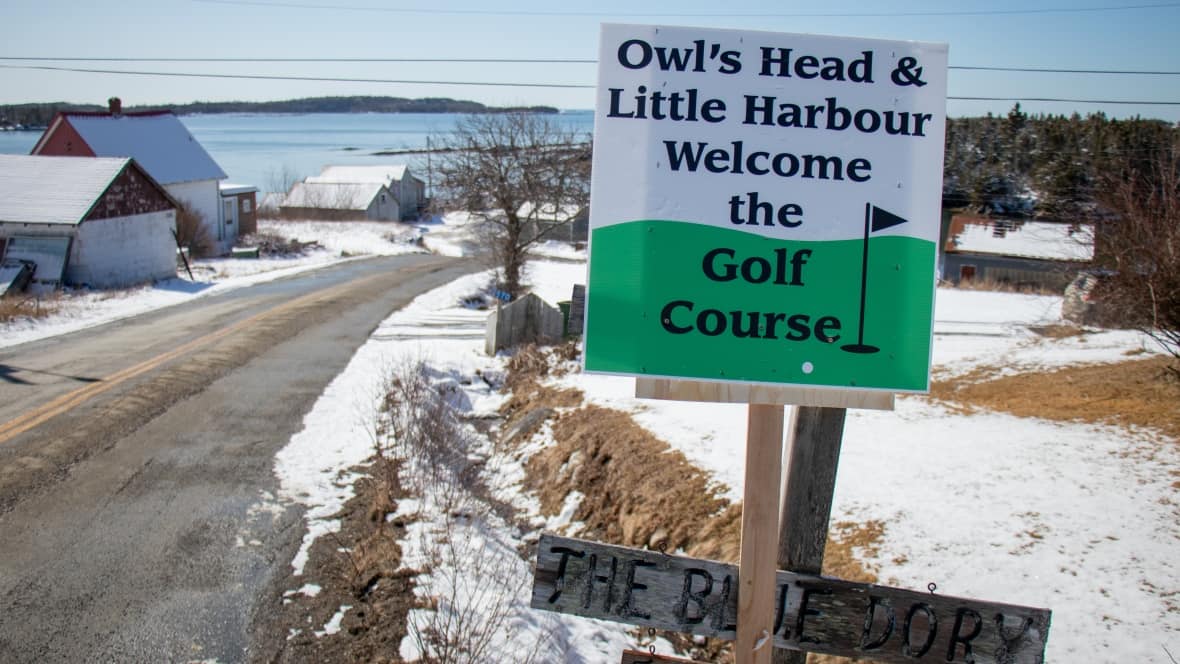 9 months agoVideo
2:13
Signs displayed in Little Harbour, N.S., show not everyone is opposed to the sale of Crown land for a proposed golf course development. 2:13

You'd be forgiven for thinking there's some kind of election happening while passing through Little Harbour, N.S.

Just about every home along the road in this Eastern Shore community has a sign on its lawn. But rather than support for a candidate or party, many of these signs pledge support for a golf course.

Seldon Keating bought the signs after learning about the growing opposition to the provincial government's plan to sell 285 hectares of Crown land that was awaiting legal protection to an American couple who want to combine it with land they already own to develop up to three golf courses.

Keating said he wanted a way to show support for the proposed development at Owls Head provincial park reserve. He and others see it as a way to bring much-needed economic development to the area.

"The community keeps getting smaller and smaller all the time," he said in an interview outside his house, just up the hill from the local wharf.

Keating can recall a time when there were more children living in Little Harbour than there are total people today. He'd like to see something that would bring people back and help attract others to the area.

"I don't see how a golf course … can do anything other than help the community bring development into the area."

Margaret Stevens, who lives in nearby Owls Head, agrees. Neither knows the developers.

"Our communities are small and we don't have a whole lot going on down here," she said. "We have our fishing industry, but I think we want to see some growth."

The decision to remove what's known as Owls Head provincial park — it's not actually a provincial park — from the pending-protected status list of the Parks and Protected Areas Plan has sparked much opposition and a court case.

Some community members, conservationists and scientists are concerned there was no public consultation ahead of the decision by the provincial government to make the change in designation. There are also concerns about what a golf course development would mean to the rugged landscape of bogs and barrens, which includes a globally rare ecosystem.

Keating said he's worked on development projects in the community in the past that altered the land and it recovered just fine.

Stevens, like Keating, works in the fishery, and said other golf courses are built alongside oceans without reports of effects on the environment. She said she hoped what's being proposed could be like the Fox Harb'r Resort on the province's Northumberland Shore.

They're responding to opposition largely driven by people from outside the local community, said Stevens.

But it isn't just people from outside the area who are concerned about the proposal.

Just up the road from Keating's house, Ronny McKay wants nothing to do with the idea of selling public land to a private developer. McKay's lawn displays a very different sign than the one on Keating's. His sign calls on the government to protect Owls Head.

"I don't mind the golf course, I just don't like the fact that they're talking about selling Crown land to put it in," said McKay.

He and members of his family are keenly aware of the land and its composition, having hunted and fished in the area for years. McKay said it's difficult to imagine how much work would have to go into altering the landscape to accommodate the proposed development.

"It's all cliffs and swamps," he said.

The idea of golf courses being the solution to the area's economic development needs is difficult to accept, said McKay, considering other golf courses in the area have not been booming successes.

The debate extends from Little Harbour to the Nova Scotia Legislature.

A rally at Province House with several hundred people last month called for the government to reject the sale offer and legally protect the land. The NDP has introduced legislation requiring public consultation before a piece of Crown land on the pending-protection list can be removed.

Although the government has said a condition of the letter of offer is a public engagement plan and that cabinet would take public feedback into consideration before deciding whether to approve the sale, NDP Leader Gary Burrill said that isn't good enough.

"After all, that land was put on the pending-protected list in the first place as a result of an extensive public consultation and the extensive sharing of information," he said last week at the legislature.

On Feb. 19, the day before the rally at Province House, Beckwith and Kitty Gilbert, the couple trying to buy the land, issued a statement through their lawyer saying they were hitting pause on the process to consider what's already been said about their proposal and consider "multiple options." They said they are ultimately dedicated to preserving the natural environment and creating sustainable jobs.

'The ball is completely in their court'

What they have not said is whether their pause is a permanent one and if they are backing out of the letter of offer, or if it's just a pause in the process they must follow before ultimately trying to buy the land. The couple's lawyer said they had no further comment on Monday.

If there is an answer to the question, Lands and Forestry Minister Iain Rankin doesn't have it. Rankin said his department has contacted the couple, but hasn't received a response. He said the letter of offer still stands and doesn't expire.

The minister said he thinks the couple is trying to get more feedback from the community because they think it's important to have public support for their proposal before going ahead.

"The ball is completely in their court," he said.

With files from Jean Laroche